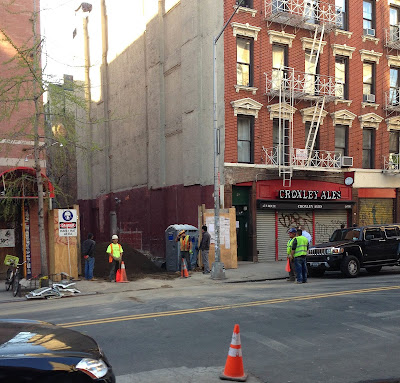 There's now a full Stop Work Order on 26 Avenue B, the construction site adjacent to the building that had to be evacuated on Monday evening. Construction recently commenced in the empty lot next door on a new 6-story apartment building.

DNAinfo reported that a resident at 28 Avenue B started to notice cracks in her ceiling after construction started in the lot. Debris also reportedly fell from the fifth floor yesterday afternoon.

An EVG Facebook friend said that the building shifted. "There's a crack that runs up the back of the building. It's like the building experienced an earthquake."

The DOB notes the following about No. 28:

On Monday night, the city issued a Full Vacate Order for No. 28, which also houses Croxley Ales on the ground-floor. The bar remains closed. According to their Facebook page Monday night:

[W]e are sorry to inform you that we will be closed this evening until further notice due to neighboring construction. But have no fear! We will soon be back and better than ever...stay tuned...!!

Here's more from the Vacate Order via the DOB:

Meanwhile, yesterday, we spotted crews busy inside the 26 Avenue B site next to the damaged building. The following report is on the DOB website now for 26 Avenue B:

Joe Ferrante, an FDNY battalion chief, told DNAinfo that excavation "possibly contributed" to the damage at No. 28. No official word when residents might be able to return.

The following photos, via EVG Facebook friend Edward Arrocha, are from last Thursday, and show the extent of the work that was taking place inside the 26 Avenue B lot before Monday's discovery ... 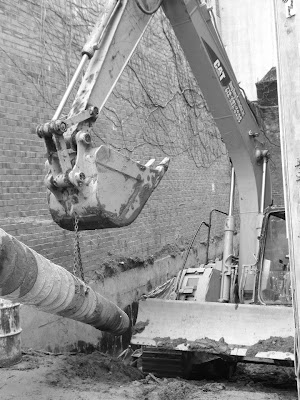 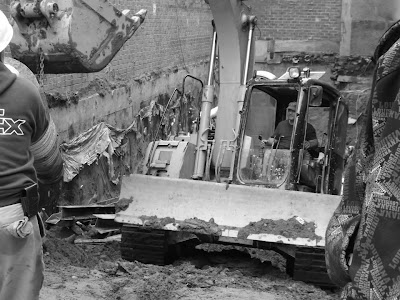 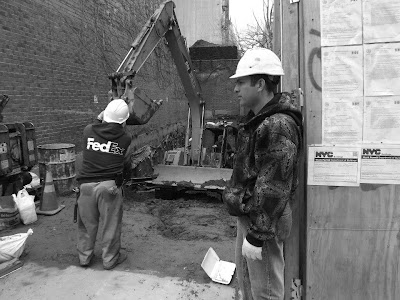 And I was reminded that there were two major fires at 28 Avenue B ... one in 1994 that knocked out Collective: Unconscious and later when the storefront housed an electronic repair shop ... 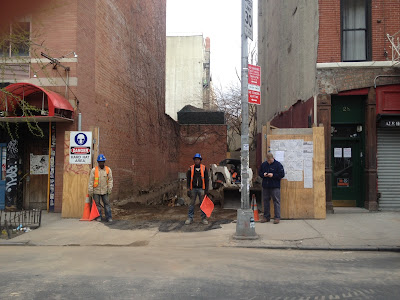 "Imagine my surprise this morning when I walked past the lot at 26 Av B and saw excavation continuing. I called 311 and they said that the DOB would address the issue "within 1 1/2 business days". Here's to bureaucracy."

Perhaps they are there to help shore up the side of No. 28?
Previously on EV Grieve:
[Updated] 6-story apartment building ready to rise from the former Croxley Ales beer garden

[Updated] Report: 28 Avenue B has been evacuated
Posted by Grieve at 6:20 AM

Email ThisBlogThis!Share to TwitterShare to FacebookShare to Pinterest
Labels: 26 Avenue B, 28 Avenue B, Croxley Ales

What a total pain in the ass for residents and businesses, to say the least. Also, looking at the last picture, the role FedEx in this construction may want to be

1pm and they are still working. I also called 311 to report it and they said that someone would check it out in 1-5 days. The guy in charge got in my face when I was taking pictures and told me that he "did not want any of his guys being photographed" I informed him that if that was the case he should not be violating a stop work order and luckily he did not escalate the confrontation.

I'm so tired of developers getting carte blanche to break the law without repercussions. If this were a restaurant complaint, there would be health inspectors with hefty fines descending on the place. Building owners constantly flout the law without consequences- even if they build illegal extensions, instead of making them take it down they just shrug and say oh well, too late it's already built.
Now these people might be out of their homes and the developer could care less- unless they get severe punishments, they won't change a thing.

311 is only if you've take a trans-fat by mistake

As long as you were on the sidewalk, you have the CONSTITUTIONAL RIGHT to photograph "the workers". They just don't want their actions documented because the foreman probably knows they are violating an order.

WHy the fuck are they trying to or allowed to put a building between those two old buildings?

FYI, Anon @ 10:44, it is actually safer for those buildings to *have* something between them. Probably when those were built, the now-missing one was built at the same time. Quite possibly they have party walls on the sides that were not intended to hold up a building by themselves. Often it is shear luck in having something overbuilt that has kept it standing when the adjacent one was demolished.