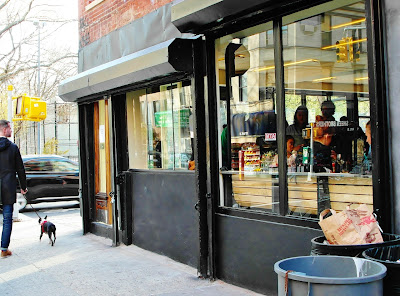 Over on East 10th Street and Avenue B, renovations are complete at the former Life Cafe space. The partners, East Village residents Nialls Fallon and Gareth Maccubbin, showed the space off Sunday afternoon to friends and family as a way to celebrate the end of the construction. (Gammablog was there, and has photos of the interior.) 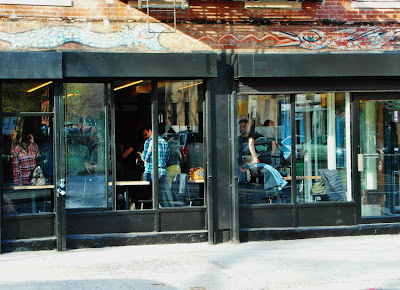 The cafe is called Maiden Lane. Per Eater, they plan to serve a regionally sourced food menu. (CB3 OK'd a beer-wine license for them in October.)

We asked Fallon for an update.

"We are waiting on inspections and hope to open by the end of the week for daytime cafe service. Wine and beer license to arrive soon and then we will open for evening service."

The two partners have ample restaurant experience at two popular Mulberry Street eateries. Fallon was the general manager at Torrisi while Maccubbin held the same position at Torrisi spinoff Parm next door.

This is what Fallon told us about leasing this space last fall:

"We decided on the space for two reasons, the first being we didn't want to see the 7-Eleven-Starbucks scenario you mentioned happen there. Second, we wanted to be in an iconic space that carried on some form of community identity and East Village-ness. I am excited to create something new and make sure that the corner remains owned and operated by locals."

[Photos Sunday by Bobby Williams]
Posted by Grieve at 6:05 AM

It is a confusing name, and tough to google maps, ha. But I am optimistic.

We peeked in the windows Sunday when we saw the place in operation. The inside is as bland as can be. Maybe they aren't finished. Good luck!

i just miss life so much and cannot get over this awful name.

I'm glad its not a chain. Welcome to the neighborhood.

Terrible, unfortunate name and by the looks of sunday, they're going to be catering to the douchey, fancy people wannabes. With the dorms coming around here, that will be a Dunkin' Donuts/TacoBell in 2 years.

I really miss Life Cafe, where I used to hang out during mid afternoon, and have iced tea and a light food fare (soup or salad). I always seated outside to watch the passing people. I do hope the new venue has outdoor seating.

Oh, I see they're playing "we're from the neighborhood" card... Usually that means that they've lived here for 6 months and buy a Ramones T-shirt and think they're the all knowing authority on East Village life.... Kinda like when Republicans wrap themselves in the flag... A lot of these new jacks play the neighborhood card and people can tell immediately whether they're legit or not. I'm sensing no... Although it wont matter to the clientele that their publicist will be going after.. Serving 6 olives on a plate or some shitty cheese plate also doesn't make them a restaurant either...

Maybe a musical/play will be born from here too, and instead of Rent the title will be Buy or Consume. You know, it'll tell the story of a group of wealthy trust funders 'struggling' to be young 'artists'(they go to Art Basel) and 'musicians' (they can Spotify and 'DJ' via Mac) and 'surviving'(they have to line-up for $12 eggs for brunch --omg!, the humanity!--, not enough Whole Foods in the nabe) and 'creating'(they have a tumblr) while slumming in New York's EV/LES in the affluent days of a trendy Alphabet City, under the shadow of artisanal cocktails and cupcakes.