The Kushner Companies meet the neighborhood 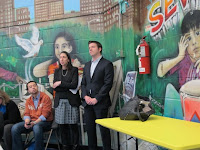 Last night, reps from the Kushner Companies — owners now of half the East Village — met with residents and Community Board 3 members during a Land Use, Zoning, Public & Private Housing Committee meeting.

We did not attend, but the consensus from people we spoke with later seemed to be: waste of time.

Per Jill: "That meeting was bullshit."

Per Rob: "Well, we did learn that they intend to construct extensions on their buildings."

We heard the reps were very nice — and very media-trained, offering robotic soundbites from the Meet The Community Playbook.

BoweryBoogie was there. Per BB:

It didn’t go over too well. Not with residents. Not with the Land Use subcommittee of Community Board 3. The Chief Operating Officer and Managing Director of real estate development represented the company, extending an olive branch, as it were, and pitching their intentions. Namely to create a “responsive, welcoming, and secure community” and to operate the buildings with “the same high standard.”

On Monday, residents of a now-Kushner-owned building shared stories of not having heat or hot water on a regular basis, structural damage and an unlocked front door, which reportedly led to a break-in.

Anyone else attend last night's meeting? Hit us up in the comments with your thoughts. Of the meeting.

Soon, we will all be writing our rent checks to Jared Kushner

so far dealing with these people has been a shit show. they are supremely unorganized.

that meet and greet was a total joke. no one bought into it. cool to see so many on the same page for once.

great that the tenants are getting together but don't count on much from the community board.

People: JUST PAY YOUR TAXES AND LEARN YOUR PLACE, its not very complex. Give up your guns and shut your mouths.