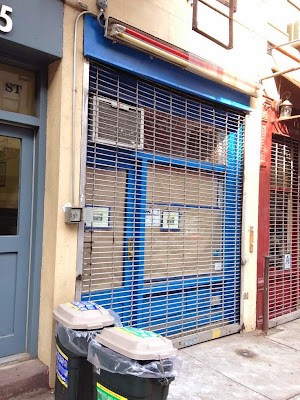 A few weeks ago, an EVG reader spotted a new sign over at 75 E. Fourth St. between Second Avenue and the Bowery for a new business called Pigskin™ … 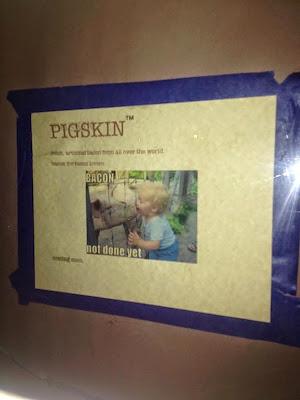 "Fresh, artisanal bacon from all over the world."

Turns out that the former FAB Café space will be the second outpost of the Williamsburg-based OddFellows, which specializes in "small-batch, locally sourced ice cream," as Grub Street first reported yesterday.

Although OddFellows boasts 116 flavors (Buttermilk Blueberry Honey and Chorizo Caramel Swirl, among 114 others), the East Fourth Street shop will have eight flavors on rotation and a small counter suitable for up to five people.

The shop is expected to open on May 1.

Previously on EV Grieve:
Will we finally be getting that 'fresh, artisanal bacon' shop in the East Village?
Posted by Grieve at 5:10 AM

No hoof, no thanks!

I'm sorry, I just accidentally deleted a comment ... the one about things here that are not locally sourced, such as the cash register... I didn't mean to do that! If you have the energy to recreate it... apologies...

Chorzio ice cream? Should obviously be served in a (locally sourced) tortilla cone.

Things which are not locally-sourced: milk, sugar, vanilla, cocoa, the machines used to make the ice cream, the refrigerators, the cash register. To name a few.

I'm waiting for ice cream made from human milk and sourced from the upper east side.

what on earth do you people like? seriously? would you be happier with a Baskin Robbins? a TCBY? or a chase bank? or another oddities store? seriously... I open up this forum for a discussion on what could possibly open here that wouldn't cause an outrage in the comments section about locally sourced cash registers... which by the way is a totally ridiculous argument... and to the dude that said that milk wasn't local? what planet do you live on? Even the NY State prisons probably have "local" milk...

so begin... what would make you happy? and not enraged?

Is this an M.H.A. (Mutual Housing Association) project? If so, I hope it's going to be inclusive enough to offer non-dairy flavors.

You may laugh, but people of color can't digest dairy easily; that's a fact.

Gavni - the writeup said locally sourced ICE CREAM, not locally sourced MILK, and frankly, it doesn't matter if they use corporate homogenized milk. Do they intend on saying - 'we use milk from New York cows'? Thats not what the piece said. There is no locally sourced milk in New York City. Do you think cows in Albany are local? There is locally sourced honey, but I think someone has to be insane to eat nyc honey it has to be full of lead and chemicals.

@Gavin
I think anger is part of the grieving process, bargaining is next when we ask our new landlords to not evict us in favor of a rich NYU student, next will be depression as everything we loved is gone, finally we will accept the EV a place we no longer can live. So please don't force us past anger nobody wants to start stage 3.

Let the NYU students eat bacon. It's a killer!!!