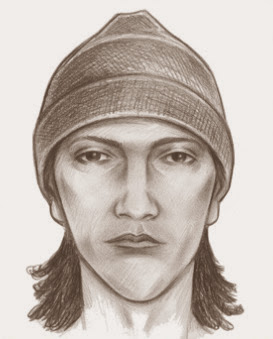 At 3 a.m. this past Sunday, police said a 32-year-old East Village woman woke up to find the above suspect standing on her bed.

The NYPD said the man then sexually assaulted the resident, but fled after a struggle.

The NYPD described the suspect as a Hispanic male in his 20s, standing 5-4 and weighing about 160 pounds.

There wasn't any mention of the address — just that it happened within the jurisdiction of the 9th Precinct.

Updated 11 p.m.
We're told that the incident happened on East Seventh Street between Avenue A and Avenue B… contrary to what a News 4 New York reports states tonight … (They list it as near Avenue B and 6th Street.) According to NBC, the victim told police that she forgot to lock her door before going to bed.
Posted by Grieve at 9:19 PM

Why I sleep with a knife under my pillow.

Forgetting to lock your door does not entirely explain this. How ever did he get into the building? It reminds me of something: If you don't recognize someone, DO NOT hold the door open for them. Who ever let this guy in paved the way for this attack.

This new age of idiot 20 year olds are constantly propping open the doors. I am constantly closing them. Someone once told me that a stranger will try your door knob at least once a week. I'm certain that's not a fact, but still a good scare tactic to live by. I'm sorry this happened to this woman, very scary indeed. And as for the "ladies" comment, are you implying that it's safe for men to keep their doors unlocked? Men are not immune to rape. I also keep weapons, preferably rusty ones, stashed all over the place.

People, please don't think of knives or other bladed objects as protection. Unless you are trained to use a knife as a weapon you are as likely to hurt yourself. Blunt force is better. Think baseball bat. Or (like I keep by the bedside) an old sand wedge. Objects that are designed to be gripped and swung hard and to strike other objects with maximum force. Just one brisk blow to the nose or head area and the assailant will be at least stunned which should buy some time to flee, or ideally, to deliver some follow-up blows.

Yeah, I keep a baseball bat by my bed! woot

Preface: I am very glad that this woman is alive and that she fought back and that she provided a really good sketch. I hope they catch the bastard.

But add me to the chorus of people who cannot believe this epidemic of unlocked doors. She forgot to lock the door "before bed"? Here's a tip, when you enter your apartment, lock the door behind you immediately! There is no fucking need to keep it unlocked! And this goes for men, women, whomever. This is a giant city full of strangers, it is not Friends (or whatever the latest NYC-based sitcom is where people pop in and out of each other's apts). Don't be naive.

Reply to @rosrosa: They don't always need to be let in. My building nearby had a problem once with outside cracksmokers getting in late at night and smoking crack under the stairs. I watched them quietly let themselves in with a [simple object that everyone has, I don't want to say what].

All you yutzes with bats brooms knives what have you are just going to get yourselves hurt unless you happen to also be a big strong fit male. The bad guy will do as he pleases to you lame heroes.
I have a 12-guage shotgun within reach when I sleep. It is legal and registered to me. The unbelievable crap I had to go thru to get this thing licensed in this liberal city makes a story in itself. And I am a 55-year old person with a super clean record.
I suggest everyone do the same. Yes the libs have made this a huge pain-in-the-ass to do in their effort to disarm the law-abiding populus, but it's worth it.

Oh brother. The point is to not let it get to the point that you, an average person who's not a trained assassin, wake up to find a total stranger standing over your bed.

My first LES apt required locked gates in each window and a police locking bar for the front door. That's how I slept at night.

@Anon: 12:22, why you felt it necessary to crudely insult anyone who has stashed weaponry in their apartment that ISN'T a 12-gauge shotgun I don't know, but why am I not surprised that a gun-owning ranter like you can't even spell "gauge" correctly? You sound like you don't belong in this city, so why don't you move someplace simpatico to your rants, like oh, say, Montana? There's a good boy.

I lived in a burglar building in the early 1980s near the corner of Rivington and Ludlow Sts and learned a few things. One of those things is that cops consider the kind of criminal (or crew) who breaks into an apt where someone is not home (ordinary burglar[s]) and someone who breaks in to a possibly occupied apt to be two VERY different beasts. The latter beast is to be considered EXTREMELY dangerous. If you've arrived at the point where you've just awakened to find an extremely dangerous individual standing over your bed, your having stashed weapons of any kind around will probably be of little-to-no use.

The point is to make your apt so secure in the first place that any criminal type will prefer to move on to someone else's. If your apt cannot be so secured, you shouldn't be living in it.

This reminds me of the girl on East 2nd St who forgot to lock her door only to find some drunk person had spelt in her bed.

One reader commented on how they hadn't locked their door in 25 years. I called BS on them, there's no way something wouldn't have happened or ben stolen in 25 years, there are way too many doorknob jigglers and wannabe crooks (including delivery guys, bad neighbors and underpaid handymen) for that to be possible.

Dr. Bop said they even lock their doors all he way up in Canada, which isn't what they said in Michael Moore's movie Bowling for Coumbine, but thats another story.

Why anyone would INTENTIONALLY not lock their door in NYC is a mystery to me. I hope this woman is OK, but it's worth repeating what was said back in January on this very topic:

Accidentally not locking your door is one thing, but not locking it on purpose, much less for 25 years in NYC is total BS. Unless both of your wrists are broken, or you are so lazy that simply turning the lock on a door is a major undertaking, you just lock your door.

I have a fully functional BS meter and right now the needle is moving off the charts and into unknown territory. Please convince me and the rest of us that you never left town in 25 years and that nothing ever got stolen? Back in the day if you left the EV for a week when you came back you'd have a house full of squatters, drug addicts, or worse, close relatives.

Ever wonder why some people have as many as 5 locks on their door plus a chain on the inside? Because sometimes the pizza guy delivers more than just a pizza.

Everyone who says they don't lock their front door in NYC please post your name and address and a group of us will gladly come over at 4AM just to see if this is really true. For now I am tuning off the BS meter, the alarm on it is really giving me a headache.

@12:22pm: Oh please - how long does it take to PICK UP and AIM a 12-gauge shotgun if you're in bed, sound asleep? You think the bad guy is gonna give you time for that, or do you think you have super-humanly fast reflexes?

I think you're in fantasy-land.

3:08 a shotgun is the single best home defense weapon reasonably available for most people, perhaps one might argue for a pair of professionally trained attack dogs as equally useful.
The shotgun of course is an easier item to maintain and care for than 2 large dogs.

Nothing is perfect. A shotgun is as close as you can get however.

Okay, enough debates on arming oneself and locking doors. As a female resident of 6th st between A and B (who always locks my doors), I'm more interested in further details, especially as to exact location and means of entry. Thanks.

@moe: Why would anyone think a 12-gauge shotgun "within reach" (as 12:22pm described) would be easily grabbed & maneuvered in tight quarters like a bedroom?

A handgun under the pillow is one thing (though even that strikes me as insane); I can't imagine many people are sleeping with a shotgun under their pillows.

The best defense is simple: Have (and use!) appropriate locks on all one's door(s) and windows. That defense doesn't require a gun permit, and it doesn't cost anything in dog food or veterinary fees.

This is from the CBS report:

The victim told investigators she believes the suspect followed her into her building through the main entrance and then later found her apartment door unlocked.

7:22, both good points. The best LEGAL shotguns to use in home defense situations are short barrel/short stock or collapsible stock models such as Mossberg 500. I say legal because to deal with the space restrictions indoors one is actually best off with the barrel "sawed-off", which is illegal for reasons having to do with concealment in outdoor situations.
Yes a pistol under the pillow, or more realistically attached to the bedframe, is superior but only for a person with sufficient skill to use a handgun effectively. If you get the training and put in REGULAR range time, go for it!
As far as that sleeping issue goes, everything is predicated upon the intruder making some kind of noise or disturbance to wake you, or your dog, or your cat, or your neighbors dog, etc. If he sneaks in completely silently, well that is when the attack dogs are the much superior item, as no one is quiet to their ears, and nose.

This new age of idiot 20 year olds are constantly propping open the doors.

Or the family in the front apartment of my building who props the front doors open because it's more convenient; daughter just had her third child, and it's a pain opening and closing the vestibule doors every time they go in and out.