Shakespeare & Company space is for lease on Broadway 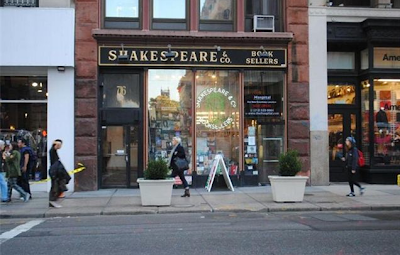 The longtime home of Shakespeare & Company is up for grabs at 716 Broadway. As we first reported on Monday, via a tipster, the store had lost its lease here between Washington Place and Waverly Place.

Our tipster said that the landlord wants a big rent hike. How big?

Massey Knakal agent Brendan Gotch told The Commercial Observer, who first reported the news of the listing yesterday, that the asking rent is now $50,000 a month. While he does not know Shakespeare's current rent, the new rate is "probably two or three times what they're paying now."

Mr. Gotch explained that while both he and the landlord are sad to see the Shakespeare & Co. go, business is business. "That part of Broadway has changed," he said. "Their lease has expired and they're staying on briefly until the landlord acquires a new tenant. The fact of the matter is that along with many bookstores, they are having trouble paying rents that were affordable 10 years ago when they signed these leases."

Our tipster mentioned that some store regulars were interested in a crowd-funding campaign. However admirable, such a campaign is likely not going to help the store stay in a space asking twice as much rent as before…

Sheeple do not leave, stand your ground.

Mr. Gotch, I think you may just have had a "Pinocchio moment". There is a big difference between paying rents that "were affordable 10 years ago when they signed these leases" and the current asking price of $50K per month. Especially pointed is your remark that the new rent is "probably two or three times what they are paying now". Your nose just got a little longer.

Let's be honest for a moment. The rent is going up because the landlord thinks he can get a big national tenant that will pay this ridiculous amount because it wants access to all of the NYU kids in the area. I'm not blind to the fact that Shakespeare is slowly managing its way out of business (it's been a poorly run operation in a weak industry for years) but I'm guessing that if the landlord had agreed to renew the lease with a 10% increase, rather than a 100 or 200% increase, I probably wouldn't be writing this.

Walking along Broadway south of Astor place is like a stroll through the new Times Square. Fast food places, chain stores have pushed out any "Village" that was once there. Half of those walking around are tourists the other half of NYU students all of which are transient. Broadway is now a tourist throughway from top to bottom.

Yep it is pretty much a cultural desert on that part of Broadway.

Why should that section of broadway be any different from the rest of manhattan. maybe disney or ESPN will open a facility and provide 'culture' appropriate to the locals, although actually disney is a little too old for the nyu'ers, probably sesame street studio would be more fitting.

I really do not understand how businesses in this city are not protected under rent-increase laws. That said, I hope the landlord gets screwed and the space stays empty.

Some day soon I will probably leave NYC and I will have less reason to miss it than before -- as I can go to 7-11 in any town. NYC has lost whatever made it special in the first place.

We must look at another source/cause/player in the rent increase scenario - the realtor leeches/instigators, in this case,Massey Knakal. I knew someone who worked for these vulture predators - constantly calling and trying to get properties to list/lease ("fleece"?) so their massive commercial firm can make yet more and then MORE money for themselves - screw the business leasers - they're just minor pawns in the game of big bucks. The whole thing is making something out of nothing. Everytime there's a new lease set up - these parasites make more money on the turn over and yet another business goes under, people lose their jobs, have their lives disrupted/ruined - all in a vicious cycle of more money for the big guys... Absolutely disgusting.