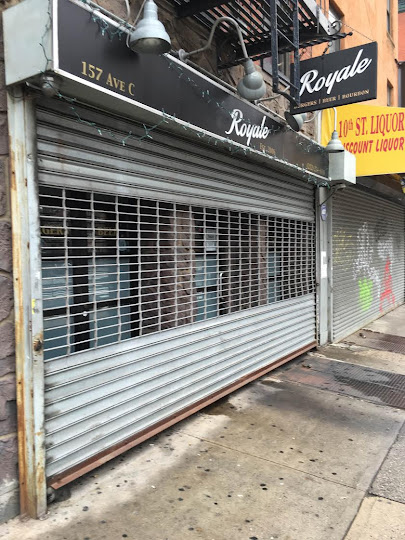 The owners of The Wayland still intend on opening a neighborhood bar called The Drift on Avenue C, though now in a different location.

As we first reported in October, Robert Ceraso and Jason Mendenhall, who own The Wayland on Avenue C and East Ninth Street, had designs on part of Babel's hookah footprint across the street at 129-131 Avenue C. That's no longer in the works, and a backup plan has emerged with Royale, the sports bar with well-reviewed burgers at 157 Avenue C between East Ninth Street and East 10th Street.

Ceraso and Mendenhall, who also own Good Night Sonny on First Avenue and St. Mark's Place, will now go back in front of CB3's SLA committee next month for a new liquor license for the Royale space. (The two had previously received the OK from CB3 for a license for 129 Avenue C. A handful of Avenue C residents spoke out against this application, which you can read about at Gothamist.)

We asked Ceraso for an update on The Drift.

For starters, he said the concept, a neighborhood bar with a small Latin-influenced menu featuring fish tacos and a few other items, is remaining mostly the same.

"The 129 space started to get complicated. The Babel operators decided that they didn’t want to give up the space anymore after we got our approval and the bar and building had some issues," Ceraso said. "We felt like it was all going in a way we weren’t happy with and something was telling us to give up the space."

After that initial disappointment, Ceraso learned that Royale, whose owners also run Cafecito at 185 Avenue C, was for sale.

"And that space just seemed perfect for The Drift," he said. "We can do the same thing we wanted to do inside but also have that amazing yard to utilize. The only change in the concept will be to further the planned daytime offerings — breakfast all afternoon, with aquas frescas, juices and cafe con leche, and take advantage of the backyard seating."

Ceraso and The Drift will appear before CB3 on Jan. 11. (You can read the PDF of their questionnaire at the CB3 website here.)

Ahead of that meeting, Ceraso said he'll be planning a neighborhood Q&A session in case there are any concerns about the outdoor space. (And no word just yet when Royale might close.)

Previously on EV Grieve:
Wayland owners catching a Drift on Avenue C
Posted by Grieve at 4:30 AM

Email ThisBlogThis!Share to TwitterShare to FacebookShare to Pinterest
Labels: Royale, The Drift, The Wayland

When exactly did Royale become available and where will I get my burgers now? Royale actually is a neighborhood bar, and doesn't need a reboot to get there!

The Wayland is a nice spot, but I will be sad if the Royale turns into The Wayland 2.0. I like their burgers, the staff is friendly, and it's got a great neighborhood feel with none of the pretense. Long live the Royale!

How many sports bars can open until they start closing from over saturation? Sports bars are absolutely the worst drinking establishment possible to live near. Drunks are always loud but add a (fill in your favorite televised sport here) which yelling is part of the "fun". Most now favor open facades so the noise spills out far and wide and during colder months, drunks which smoke bring it outdoors, usually just under your bedroom window. Sports fans will watch any game on TV regardless is they have an actual interest or not. The drinking, yelling and adrenaline is what they are after.

Honestly Grieve??? No mention that one of the greatest Rock Icons passed away yesterday??? RIP LEMMY!!!!

I think the worst bars are ones like The Wayland and Good Night Sonny on St. marks Place. Their patrons wear expensive casual clothes, makes me want to throw up. They just want to secure another asset. RIP East Village.

Royale wasn't always a good neighbor. They are always a SantaCon bar, attracting the Santas to C. They also picked up the Sunburnt Cow's drunk brunch crowd. Last time I was there I was entertained by the two drunken couples in their Florida gators gear. The women were drunk. One of them was fighting with her BF. She started crying. Later, she and her friend are sitting outside on the curb and one of them throws up on Avenue C right by the bus stop.

There are plenty of sports bars like this around this neighborhood and especially Murray Hill.

11.31 AM---Ah, Murray Hill, the ground zero/mother lode of Bromageddon. We are now, for all intents and purposes, Murray Hill South. Like Yah! Remember this article?

Wayland is for clowns, i laugh when visiting city dwellers say they are going there; $12 for a finger of whiskey, $7 for a can of beer. They make their money from daddys' credit cards throughout the country and are riding a very flimsy wave of having mediocre aesthetics and a corner location.

Royale is a neighborhood bar. I lived on avenue C for 2 years and went to the Wayland once but I was at royale at least once a week. I also met my girlfriend there. Don't know why the Wayland people think they can just take over an actual neighborhood bar that's been there for a decade, gut it, and presume to call what's left Lousaida's neighborhood spot. Also, no one bothered to confirm any of this with the royale people? Something is definitely fishy about this...

I'm a residing city dweller and I think the Wayland is awesome. Still unclear about Royale. Their burgers are awesome. I'm sure the crowd sucks now. I mean how could it not? The bros and hos are everywhere. Doesn't mean it should close.

To the person who mentioned it hosts SantaCon: I hate it as much as anyone, but that's 1 day a year. If that's all you can come up with for not being a good neighbor, you need to shut up.

Hi neighbors,
We also agree that Royale is a great neighborhood spot with nice people and a great burger. It is not our intention to replace them. We just want to do our own thing now that they have decided to move on.
I can't speak for them but 10 years is a long time in our industry and I believe they have just decided to continue on to the next part of their lives.
Our intention is to open a comfortable space that we and our neighbors would be happy to spend time in.
We aren't opening a cocktail bar, just a bar with nice people and quality product at a reasonable price.
We'll miss Royale and we hope that we can be a place that is welcoming for everyone. We only ask that you hold judgment until after we open. If we do a shitty job that's on us. If we don't, maybe (hopefully), it will be awesome. We'll do our best.
In the mean time everyone should go and give Royale some love, shake some hands and eat some burgers. I'm sure they would appreciate it.
Best regards and Happy New Year,
Rob Ceraso
The Wayland & Good Night Sonny
917-332-8432
robertdaniel12@yahoo.com

They're not taking over Royale. Royale is selling.

To the new owners of this bar. I can't think of any of my neighbors who will be excited about a new bar opening in an already bar / nightlife saturated neighborhood. The dramatic degradation in the quality of life in the past several years is due to the increase in alcohol serving establishments and the influx of patrons of such places. We have all too often been victims of the old bait and switch of cozy neighborhood hang out to loud drunken sports bar that no new bar is welcome. Why not consider making a better business choice and open a place that does not need to sell alcohol to make a profit but instead brings a needed service or product back to our neighborhood. The answer is opening a bar is like picking low hanging fruit, high mark up, endless flow of 20 somethings that always over drink and little concern for neighbors who need to sleep.

This is not increasing the number of bars. There's already a bar there. You people act like they are coming in and taking over an old age home. It's like Royale is switching ownership. I don't even go to the Wayland or Royale but I can tell you that the Wayland is fat more popular.

Great. Just another place for bros and duche bags alike to pilfer the fading goodness and charm of our beloved neighborhood. What is it with bros in the east village? It feels like stepping onto the grounds of a fraternity house. Yuck.

If you leave that backyard open C-Squat is going to have a field day on your patrons. Good luck with that!

Bummer, what's the Royale closing date. Go there once a month at least. Need to get in more burger.


Hey Wayland do you think you can close your doors and stop torturing me and my neighbors. This includes old punkers and Puerto Rican natives, Chinese senior citicens and anyone else who makes Loisiada a great place. How is allowing your Michael Kors-Mark Jacobs yuppie noise to billow up and down Avenue C in any way honorable?
Unfortunately for us I think your gonna do fine on Saint Marks Place because most of those buildings have been taken over with douche. Not here, there are still plenty of interesting people on and around Avenue C.

We who live and work on Avenue C don't really care what you want. What we care about is that there are already too many bars on Avenue C and it would be great not to have another one. You already have two, one yuppie cocktail lounge and the other self-admitted crowded loud spot. What makes you need more, what makes you think we need more. There are no neighborhood bars really left anymore because the saturation of nightlife has driven out long-time residents and replaced them with transient 20 somethings so there really isn't a neighborhood. Who are you allegedly opening this neighborhood bar for when your neighbors tell you they don't want anymore. Didn't the folks who showed up at the last CB 3 meeting tell you that themselves? if you truly care about the neighborhood, keep the two you have and leave us alone on Avenue C.

I don't understand the backlash here. I frequent both bars, and I can assure you that the crowd at Royal is much more roudy than what will replace it. I see mostly classy young professionals in Wayland, and would think everyone would be glad to see this upgrade of clientele.

As a former regular at Royale I'm very sorry to hear of its closing. Fantastic staff, owners and burgers. I wish them all the best in future.