At some point, every single home or business or church or structure of any kind — empty, under-construction or abandoned — in the East Village has had a Wacky Wok menu placed on the front door. Multiple times. Maybe daily. Probably daily. I'd argue that there are more Wacky Wok menus around than any locksmith cards combined.

I've spent too much time thinking about this through the months. (Years?) Do the Wacky Wok menu droppers work on commission? Are they paid by the gross tonnage of menus delivered? Does Wacky Wok have a printing press in their basement on Avenue D at East Ninth Street? Is Wacky Wok a better name than, say, Wok and Roll?

Anyway, I always seem to run across the locksmith people bombing the doorways. But I've never seen anyone from Wacky Wok leaving the menus behind. Once, I walked into my building and, about 45 seconds later, decided to run another errand. In that time, someone put a Wacky Wok menu on the door. I quickly scanned the street with the enthusiasm of a child catching Santa in the living room (preferably late on Dec. 24). There wasn't anyone in either direction.

Anyway, I started taking photos of the WW menus. A sampling. 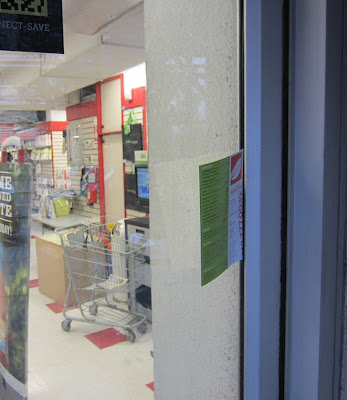 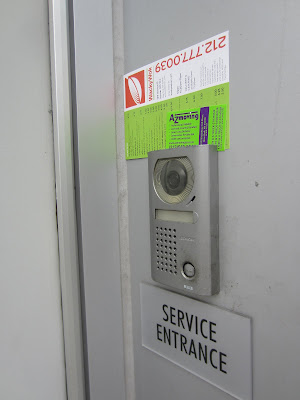 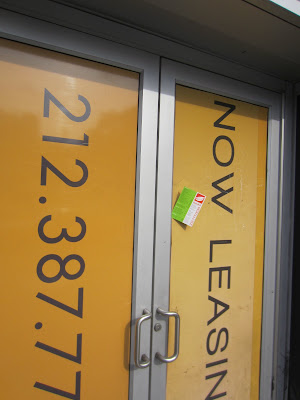 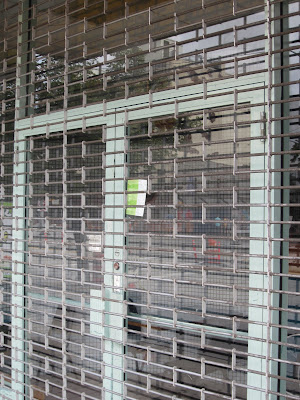 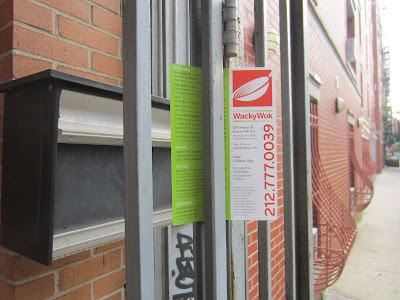 Well, you get the idea.

Then, the other day, I spotted this fellow pulling the cart thing stick a menu on the front door of 100 Avenue A, the former grocery that has been sitting empty for seven months now... 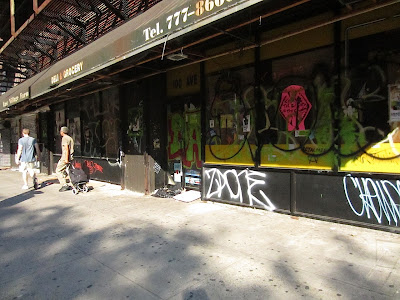 He turned east on Seventh Street. I followed to watch him work. When I rounded the corner ... he was gone. Into, presumably, the Wacky Wok time continium vortex.

Now this isn't anything against Wacky Wok, a healthyish Pan Asian eatery. For me, it's a curiosity, not an annoyance. And I've ordered food from here, and have mostly found it agreeable. And I have four or five menus to choose from every time that I call.

I like Wacky Wok, good, healthyish Pan asian, as you say. This pamphlet bombing campaign is not going to win my heart and mind though.

Funny you put this post up now - just a few days ago I noticed one stuck in the door of that small taqueria on 1st ave below 3rd st, and wondered what the hell the point was... until I noticed them in the doors of every single business all the way to Houston.
I propose a stakeout to observe the menubomber, Nat Geo style.

I find them in the floor of my lobby. About 5 or 6 of them at a time. So they somehow have the ability to go through doors.

I have always been annoyed by the Wacky Wok flyers on my door. If anything they've made me never want to try their food.

Just last night I came home to another barage of these menus where I live. I thought to myself either this place is really good or they have a printing press. And you are so right - you never see them get left.

Whoever this mysterious menu dropper is, one thing is for sure, he's bound to be one wacky, wacky guy!

My building is locked down to all menu delivery people...except Wacky Wok. I suspect the delivery guy is a vapor (vampire??) who seeps in through the pipes.

Right on the money grieve. Hysterical! I just thinking the other day "wow did they get a 2 million for the price of 1 million" special at the printers?

Wacky Wok's delivery is fucking outstanding. It's seriously some of the best food in Manhattan. I lived on 4th and Ave C for the past few years and recently moved to BKLYN but made sure to order every day before I left. I do custom Wok with soba noodles lots of veggies plus fresh pineapple (not canned! I love these guys) and market fish and the thai curry sauce- and it's amazing the quality of ingredients for the price. They can paper however and whereever they want. Them shits is tasty.

Also you can get a side of just about any veggie if you love fresh healthy stuff - which I do.

do you remember this ?

Thanks, tourist.... I knew that I wrote about them when they opened... didn't remember when, though. I should have linked to this in the post.

You know who else has a great delivery system? This place on 6th and 2nd called "Hot Kitchen". Before I got to hang up the phone, their delivery man was buzzing my door bell. The food was definitely edible.

Love Wacky Wok food, and you know why you always "see" those menus? Cause they are well designed!!! Identifiable!

Agreed. Which explains the UFOs earlier this summer.

We are not alone (when it comes to distributing menus).

Had not even realized it, but you're spot on here. Just another reason you are such a great, seasoned voice in the neighborhood. Thank you! An aha and a giggle.