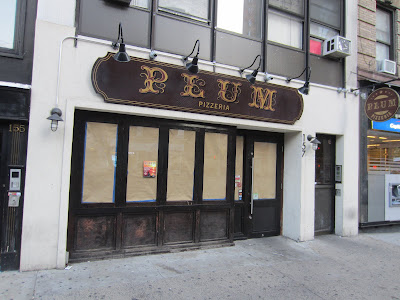 A reader noted last week that Plum Pizzeria, with brown paper over the windows, looked rather closed... No note, no notice on their Facebook or Twitter accounts... no outgoing phone message.

An applicant going by Alder Restaurant LLC was on the August CB3/SLA docket to take over the space. Alder's questionnaire posted on the CB3 website contained little information, such as who the principals are in the new restaurant.

Anyway, probably safe to say so long to Plum, which opened in August 2010 in the Cafe Brama space. There was a nice backstory here: Plum was owned by an alum of Patsy's and a former FBI field agent. (Eater has that story here.)
Posted by Grieve at 6:20 AM

Looking forward to the new tenant there on Avenue Woo.

Ah, you've seen the mockups for the new marketing campaign — "Second Avenue is for Woo."

That space is cursed!

Can they take The 13th Step, Professor Thom, and the 'Lets turn the street into a landfill with paper cups on a nightly basis' 16 Handles with them???

I will miss their pizza and pasta, which was just like Patsy's. One of the guys had worked at Patsy's like you say. I wonder if that Nicoletta proved to be too much competition.