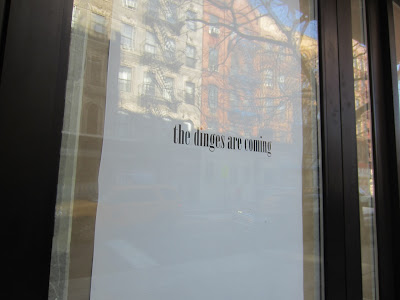 As we've been reporting, Wafels & Dinges is opening its first café based on the same concept as the popular food trucks in circulation around the city .... here on Avenue B and East Second Street... as you can see in the photo, there's a bit of a teaser up on the windows: "The dinges are coming."

W&D founder Thomas DeGeest, an East Village resident, told us back in January that the store was "progressing at turtle speed" and he was eyeing a spring opening date.

He also noted that it "will be as much a good coffee place as a waffle and ice cream place."

Previously on EV Grieve:
Is Wafels & Dinges opening a café on Second Street and Avenue B?

Wafels & Dinges hoping for a spring opening on Avenue B
Posted by Grieve at 5:59 AM

Email ThisBlogThis!Share to TwitterShare to FacebookShare to Pinterest
Labels: Wafels and Dinges

neon is up and lit inside!!