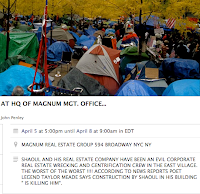 Longtime East Village activist John Penley is set to campout this weekend outside the offices of Ben Shaoul's Magnum Real Estate on Broadway in Soho. (Set to start at 5 p.m. Friday.)

SHAOUL AND HIS REAL ESTATE COMPANY HAVE BEEN AN EVIL CORPORATE REAL ESTATE WRECKING AND GENTRIFICATION CREW IN THE EAST VILLAGE. THE WORST OF THE WORST !!!!

While Shaoul has been a widely criticized developer in the East Village for years, the recent revelations about actor-poet-writer Taylor Mead's living conditions were the impetus for this event.

Articles in The Villager and the Post and at BoweryBoogie have outlined the 88 year old's current living conditions while the Shaoul-owned building on Ludlow undergoes a gut renovation. (Mead, a former Andy Warhol star, had lived in the rent-stabilized apartment for 34 years and didn't want to leave.) According to the account in the Post, "Plaster falls from his walls and roaches crawl up his legs. The kitchen sink doesn’t work."

"It’s going to kill him,” said Clayton Patterson, a neighborhood activist and longtime friend. “This is elderly abuse. It’s pretty Third World when you think about it."

As Curbed put this particular episode, Shaoul is "up to his old tricks. Or, more specifically, his old trick — forcing stubborn, rent-stabilized tenants out of the apartments he owns by having their buildings demolished around them."

Penley had this to say to us via a message on Facebook:

"I am demanding at the protest that he give Taylor a renovated ground-floor apartment in Taylor's building rent free for the rest of his life and provide Taylor with home-care assistance. He just made so much cash speculating and flipping buildings on the LES that doing something humane like I suggest he do would be a very small gesture."

Shaoul has recently sold large parcels of his East Village buildings to developer Jared Kushner. Shaoul is currently converting the former Cabrini Center for Nursing and Rehabilitation on Avenue B and East Fifth Street into residences.

Penley recently held a campout to call on NYU to help house the homeless.
Posted by Grieve at 6:20 AM

good for him! it's the least that guy could do.

While I'm no fan of Shaoul, I'm sure Penley's message will be lost when he decides to protest this and 15 other causes all at the same time.

Mead is an elderly trustafarian who never learned how to take care of himself. He's a nice old man but I have no sympathy for him. Caregiving is the responsibility of family and friends, not the landlord. Since the Factory was Mead's family, John Penley should be camping out in front of the Warhol Foundation's offices.

this is so idiotic it doesnt deserve any attention.

In response to the comment concerning my message getting out. my message about gentrification, housing and homelessness has been getting out for years. Most recently my campout at NYU was covered on the front page of The Washington Square News and the Villager as well as here and many other places. in addition I reached out to NYU students and they have formed their own housing related activist group. I invite any and all to join me at Shaoul's HQ. Housing is a human right and as long as out of control luxury housing development goes unchecked borderline families and the elderly will continue to be forced out of their neighborhoods and onto the street. The anonymous people here who are routinely saying that the poor and homeless are a police matter and that if you are old and not rich you should probably just die and get out of the way may find themselves in the same situation one day and I hope they will remember that homelessness can happen to anyone and it is usually not a choice and it should not be considered a crime. Out of control gentrification also causes anger and social unrest so be prepared for that if things keep going the way they are. Helping Taylor could be a good thing for all of us and not just him Shaoul has made so much money gentrifying the East Village and evicting long time residents especially the elderly that he could not possibly spend it all in his lifetime and perhaps he think about how he will be remembered and one thing for sure you can't take it with you to the next life if there is one.

...typical Penley promoting Penley. It's really always all about Penley. Oh well, as much as I hate Shaoul, and I'm quite fond of old Taylor...I still give a yawn, big yawn to Penley's latest self promotion.

John - if I can't be there with you in person, I am certainly with you in spirit. Ignore the trolls posting ridiculous criticisms of your action and Mr. Mead's plight and do your thing. Perhaps if Mr. Mead wanted to do, he could have sought the assistance of Cabrini Nursing and Rehabilitation Center, but Shaoul bought that and has turned it into luxury condos, so there is no place for elderly or frail residents of the LES to go or get good homecare now. Our politicians have done nothing, in fact they are about to give into NYCHA's plan to develop luxury housing on NYCHA land. Bloomberg and Quinn have Chin, Mendez and all the other elected officials running scared.

What time is this happening so I can come and show my support.

I went back and added the time from the Facebook invite — 5 p.m.

Peaceeye you could always give Taylor a donation. You really should come you might meet some good people there and you may not like me but if you came you might change your mind.

Is the weekend the best time for such a protest? Just wondering.

John Penley is a true fighter for justice.His only reward for his actions is not the little praise he receives , but the self gratification he gets for all of his hard, untiring work. Try it sometime , before you point fingers !.

I think this is a noble effort. People like Taylor Mead are widely known, but this sort of thing happens every day to people no one's ever heard of. If an effort like this brings attention to the general plight of tenants, then it will not be in vain.

I am doing it on the weekend because I want to minimize the possibility of problems with the police and don't want to get arrested again. I just went to trial in NC for protesting the treatment of Homeless Vets at the Democratic National Convention and was found not guilty at my trial but I don't want to get stuck going to court for months in NYC.

the U.S. of A needs 10,000 John Penley's, to begin to motivate folks to do the Right Thing

John Penley is one of the greatest activists and photographers to come out of the Lower East Side.

The demands of this protest show how out of touch they are. A free ground floor apartment? Who is going to pay for that? Oh yea, he wants Ben to, because he has made money in other unrelated deals. How about we address the real problem that there is no exit plan for RS tenants, as it was an emergency act 60 years ago and no one would have dreamt it would still be around!

Dear Shit on my Tenants.. I have spoken to other tenants in Taylor Meade's building and they say there is an exit plan for them Shaoul's Sledgehammer.

i suggest all you luxury condo real estate vampires look at this....http://www.cnbc.com/id/100609635 Sooner or later this bubble is gonna burst and the poor are gonna take to the streets. Just look at what happened in Chicago last weekend with the jobless and angry youth wilding in the streets. Keep up your greedy gentrification and keep taking more and more and Let em eat cake and see if my prediction for an off with their heads rebellion does not come true.

Every Real Estate website in the city of New York is now reporting on this protest and word has reached me that Sledgehammer Real Estate Developer Ben Shaoul is "freaking the F out about this".

Thank-you VERY much Mistah Penley for spreadin' the love AND the awareness.

I have been informed by Taylor Meade's attorney that they are close to a deal on a favorable buyout for him and they think I should cancel the protest. I have removed any reference to him from the Facebook event page and may cancel this however others who are in the same situation as Taylor have contacted me about wanting to speak about their situation so I am thinking about what to do ? Just to be clear I have been planning to go after Shaoul ever since he evicted Cabrini home for the elderly and a friend of mine is in the same situation as Taylor. More info soon.

This is what I am proposing that out of respect for Taylor's family and attorney we will cancel our protest at Magnum Real Estate but since this is all over the place and people are gonna show up we will have a meeting about the situation especially about others affected by Shaoul and his sledgehammer. I will be there at 5pm and wait for anyone who wants to come and we will have the meeting at a location not in front but down the street or possibly Yippie cafe. I have no doubt whatsoever that calling for this protest had an effect on any buyout deal for Taylor Meade but since others are in the same position he is I think it would be wrong not to do anything at all. I also think people should show to let Shaoul know we will return if Taylor is not happy with a buyout and also others have a right to meet about what Shaoul has done to them.

It was nice to read your post.John is actually a true fighter.this weekend will be so good with such kind of activity.I am sure other readers will also like it

This is great! Go John! I'm gonna stop by with some food and I also have a folding lawn chair you can have (with luxury cupholder)

Ben Shaoul is a bad man. A very bad man!