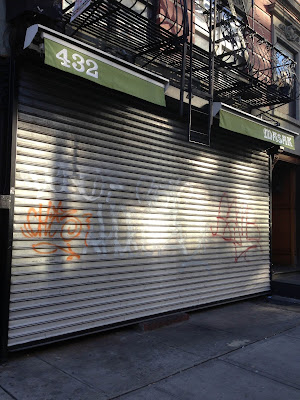 Multiple tipsters have told us that Masak, the well-regard Singapore-influenced restaurant on East 13th Street just west of Avenue A, has closed. The gate was down the last two nights during its regular hours. No one answers their phone.

Meanwhile, this appeared on the Masak Twitter feed just after midnight Saturday... #lastsupper

No one responded to our query on the restaurant's status via Facebook.

Meanwhile, in a generally positive review at the Voice last August, Robert Sietsema noted the following:

Masak started out six months ago with a limited menu, and that's how most publications reported on it. Perhaps as a result, the place hasn't gotten much traction and sits half-empty most evenings. But that's not the only problem. The biggest difficulty is the name. When a friend recommended the place, I first thought she said Masa, referring to the wildly expensive sushi parlor at Columbus Circle. Next, I thought she meant Mas, the Greenwich Village wood-oven "farmhouse." Only after she spelled it out, quite literally, did I realize it was a unique place unto itself.

We noticed the work starting in the space back in August 2011.

Chef/owner Larry Reutens confirmed the closure via a Facebook message to us.

"We had a blast and love the East Village — most of all we'll miss the faces of our neighbors who've helped to give us all such great memories."
Posted by Grieve at 6:00 AM

Email ThisBlogThis!Share to TwitterShare to FacebookShare to Pinterest
Labels: Masak

Too bad. But it really is a terrible location for a restaurant. None of the restaurants here have survived.