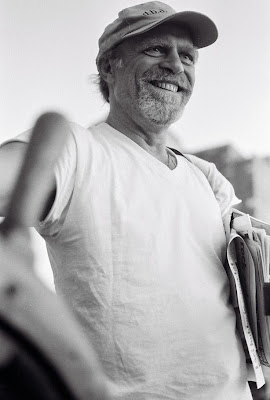 Dennis Zentek, who opened d.b.a. at 41 First Ave. in 1994 with friend Ray Deter, died on March 23 from injuries he suffered in a fall.

The folks at d.b.a., where he was the co-founder and owner, have released details about a memorial celebrating his life.

On Wednesday, April 16 at 4 pm SHARP, we will have a ceremony at the Marble Cemetery, on the north side of East 2nd Street between 1st and 2nd aves, around the corner from d.b.a. This will be a non-religious Celebration of Life and Memorial Service led by non-denominational Celebrant Sacha Jones. All friends of Dennis are welcome.

This will be followed by a New Orleans-style Second Line parade, leaving from d.b.a at 6 pm.

We will continue to honour and toast Dennis well into the wee hours at d.b.a., 41 First Ave. between East Second and Third Streets

Please, no flowers, but donations are welcome to Dennis's favourite charity - the d.b.a. bars!

His brother Ron wrote the following on Facebook on March 26:

Those of you who knew my brother ... will remember him as a unique individual whose greatest pride was saying he never worked a day in his life since as a Rock n Roll photographer, a bartender and finally a bar owner ... he was being paid for being at places he would have been anyway doing things he loved to do surrounded by beautiful women.

He passed [March 23] at Bellevue hospital from the head injuries he suffered in fall down a flight of stairs on [March 21]. To my knowledge, he never regained consciousness.

Deter died in July 2011 from the injuries he suffered in a bicycling accident.
Posted by Grieve at 5:29 AM