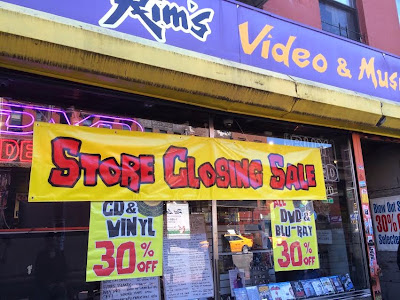 [Photo from April 21 by Williams Klayer]

The listing for Kim's arrived at Streeteasy yesterday... and it's doozy:

As we first reported on April 21, Kim's Video and Music is closing.

In a letter to Kim's patrons, management wrote:

The point is, and you should be aware, that we are NOT closing because record stores are dying, business is bad, it's not like it used to be and oh terrible world. Not at all. The actual reason for our closing is that the lease is up in July and the rent is being raised to an amount we simply can't work with.

The space was previously home to the great Kurowycky Meat Products, which closed in the summer of 2007. The Kurowycky family still owns the building... and a reliable source tells us that a family member who now lives in the South is calling the shots on the rent.

More about the closure of Kim's: 'We are NOT closing because record stores are dying'
Posted by Grieve at 5:20 AM

Maybe Kim's should open a bank that serves expensive coffee?

Unfortunately, $16,500 is now considered cheap rent in the East Village.

The post says that the family member calling the shots on the rent lives in the South (South Carolina, actually).

I'm not sure if that qualifies as a "local business owner."

shmnyc, do you have to work at being such a tool, or does it come naturally? And who ever thought I would see the day when I would be damning a member of the Kurowycky family, in whose establishment I spent a lot of moolah, to hell?

Yup, Kim's was diong so well they had to close down all their stores, but dollar pizza and nail salons and coffee shops and bars are popping up everywhere in spite of the high rent. I guess all these other stores must be getting better rent than Kims and all the music and video stores, which all basically disappeared except for a few indies. Basically Kim's is paying a fortune for product storage while these other businesses hive no inventory to store in their stores, so places like Kim's can never make it at these rents. It's a niche business now, but it's a niche the Kim's cant seem to fill anymore.

" I thought local business owners cared about "the community" "

who ever said that? stop making things up. strawman!

It's probably a son or daughter or grandson or granddaughter calling the shots. Something similiar happened with the Chelsea hotel. 3 guys had a handshake agreement for decades and then two of the partners sons step in, outvote the third son and there goes the Chelsea hotel! Why doesn't Kim's move to the South Avenue A vicinity, which is starting to develop a decent little strip of retail with the latest addition of St. Mark's Books.
There are folks in the EV now working to pair responsible landlords, Co-Op and Condo owners with small non-food businesses. Kim's should seek them out.

Hey, Anon 10:26! Can you tell us who these people/groups are, so others of us [who are working on the same issues] can collaborate and not duplicate efforts?

Well, yeah, this is why we used to have an estate tax in this country before the GOP and the Clintonian New Dems got rid of it. Inherited wealth breeds extreme douchebaggery.

The group working very hard at retail diversity is the East Village Community Coalition. We publish the get local guide and have recently assisted in the formation of the East Village Merchant's Association.

$16k per month rent plus FOUR months security deposit, holy shit. that pretty much rules out any local independent business owner, only large national chains can afford that sort of cash outlay (in addition to all the contractor remodeling costs). sad state of