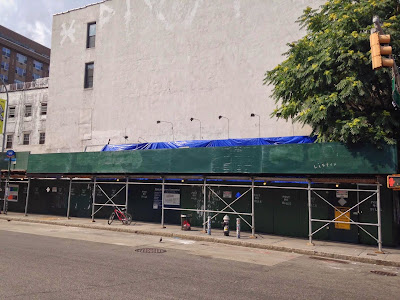 While construction continues on the new two-floor building that will rise from the former home of Billy's Antiques on East Houston and Elizabeth, the adjacent Houston/Bowery Mural Wall makes a return next week.

Yesterday, Goldman Properties, the property owner and curator of the wall, issued a news release saying that the currently covered mural will be unveiled again this coming Tuesday at 5 p.m.

In July, workers trashed the makeshift canvas that covered the wall. What remained, though, was the original wall with the mural from 2009 by Os Gêmeos, the twin brothers and street artists from Brazil. This was the first mural that Goldman commissioned for the space.

Previously on EV Grieve:
The Houston/Bowery Mural Wall has been boarded up

The mural wall will remain on the Bowery and East Houston

It's in the eye of the beholder right?

From the photo, the mural looks bright and colorful. Can't wait to see it.

Cool, I liked this mural the first time and will be happy to see it again.