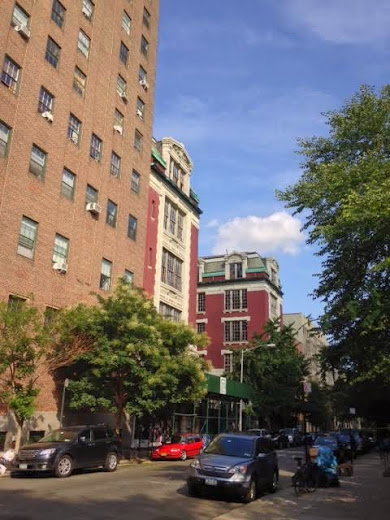 Developer Gregg Singer's plan to turn the former PS 64 and CHARAS/El Bohio community center into a dorm are on hold once again.

Here's the information we just received from Rosie Mendez's office...

Councilwoman Rosie Mendez will be joined by colleagues and community residents to celebrate a major step in trying to reclaim the historic landmarked building The Former P.S. 64 that once housed CHARAS/El Bohio Cultural Community Center.

On Sept. 22, the Department of Buildings (DOB) issued a Stop Work Order to halt any construction that may have begun under a Partial Work Permit that was issued based on misinformation to the Department.

Gregg Singer, the owner of 9th & 10th Street LLC, entered into separate lease agreements with Cooper Union and the Joffrey Ballet Center Concert Group Program (CGP) to convert the building into a student dormitory. On July 25, 2014, the Department of Buildings (DOB) approved Singer's application to have the CGP considered a not-for-profit with housing accommodations as opposed to a dormitory and issued a partial work permit in August to convert the ground and 1st floor into dormitory rooms for CGP.

After reviewing the objections raised by Councilwoman Rosie Mendez in a letter dated September 3, 2014, DOB determined that the lease agreements in which Singer and the two parties entered into did not meet the agency's criteria for a lease with an educational institution.

Moreover, DOB determined that CGP could not be considered a not-for-profit with housing accommodations since the application contained misinformation that disqualifies CGP for this status.

The Councilwoman surrounded by community residents will be presenting DOB’s findings in the latest of that this long standing battle to reclaim the building for community use.

The presentation is Sunday afternoon at 1 outside 605 E. Ninth St. between Avenue B and Avenue C.

Singer bought the building from the city in 1998.

Great news. And here's hoping everyone who doesn't want to see this building turned into a dorm will turn up and support Rosie Mendez and the community activists who are leading the charge because griping on message boards isn't activism, people!

When will Singer lose interest in this building, sell it off and move on? Red tape may be our best defense against developers unless that " "approved" rubber stamp runs out of ink.

Yeah, especially as every other square foot of space around here is going to luxury housing.

Have the city reclaim the property from Singer and restore as a school then lease the school to non profit Charter for use.

A SHADOW source tells us that Singer's plan is to wait everyone out, figuring that opposing forces (community members and politicians, etc) will eventually dwindle or move on.

Meanwhile, as this building sits, crumbling from neglect, the value continues to skyrocket.....

He's not selling and the city can't 'reclaim' private property. Who thinks the city can do that? What world do you live in? He will just wait some more and eventually make a fortune. The property becomes more valuable as time goes by.

3:34 - well the city could find that the original sale was corrupt under that administration, there's also eminent domain, and since it is being using to exproproate land from private citizens and transfer to corporations for private pipelines from canada to texas the bar for that is very low. But I like the crumble scanerio best, eventually the building will be so far gone even the city will agree it needs to be taken down. Where is the fire department to destroy the roof when you need it?

So now taking shots at the fdny is OK? The commenters here are losing it. There are so many legal issues with all those scenarios. Actually eminent domain is usually a sale of property. But never mind.

I just wish there were more business people with common sense in this community vs. a bunch of people with no sense trying to steel a man's property for their own use. This is not owned by the socialist in the area, it is own by a developer. If thats the case, I want my neighbors home and I want to use for a dog shelter. This will set an unbelievable precedent.

If you want to watch this property crumble to the ground then put a non-profit in there. They don't have the money to maintain and secure a building this age and it will have the opposite impact on the community that the neighbors and politician want. If it produces income then you have a better property with better people. This is poor thinking and stops progress and employment. I can't believe that people are this ridiculous - talk about socialism - they want to take his property? Lets bring back stop and frisk and start taking everyone's property and using it however the government wants.

Boy, you know the RE Industry trolls are out in force on this tread when the word “socialism” is being dropped. As per the GVSHP, this is the real issue, not your BS:

“This is a tremendous victory. Not only does it help protect this threatened East Village landmark, but it helps ensure that developers will not be able to abuse zoning regulations by getting the dorm “bulk bonus” the city offers, often allowing dormitories to be almost twice as large as residential buildings, if they have no actual school to occupy the supposed ‘dorm.’ Many developments GVSHP has fought, such as 159 Bleecker Street (the former Circle in the Square Theater site) and 81 East 3rd Street, got these dorm bonuses to build extra large buildings, but then when they were completed, there was no school to occupy the dorm. These projects never should have been allowed to be built in the first place.
In response to this, in 2005 the City finally put in place rules requiring developers have a 10-year lease from an accredited educational institution before they could get the dorm bonus; GVSHP supported this rule, although we fought for it to be even more restrictive, and we continue to push for elimination of the dorm bonus entirely.

After this rule was passed, the owner of the former P.S. 64 sought to build a 19-story “dorm-for-hire” on the site of this historic building, with no school in place to occupy it. The city denied the permit application on the basis of this rule and subsequently landmarked the building. The owner sued in court to overturn the “dorm-for-hire” ban and claimed that it should now be granted the building permit for the 19-story ‘dorm’ which he claimed he was wrongly denied before the landmark designation took place. A state court initially agreed, and overturned the ban.
However, in an appeal to the state’s highest court, GVSHP, EVCC, and many others submitted amicus briefs in support of the ban, citing the terrible damage which would be done, not just at this site but citywide, if it were overturned. Fortunately the Court of Appeals agreed, and the prior ruling was overturned and the “dorm-for-hire” ban was upheld. “

This was a bad sale by a prior administration decades ago however that sale had restrictions on the use that Singer did not want to adhere to and tried to avoid much to his own chagrin. Now years later the property is "Land marked" and Land mark reversals are rare. The city can "reclaim' the property under imminent domain and fairly compensate Singer for the property without giving him an excess windfall. A charter school makes sense more so than a dorm on this quiet block this Administration wants charter schools out of public school space restoring as a charter school would cost less than any other proposal and would complement the restoration that was done to St Brigid a block away.The recent billions in windfall from Wall Street fines can certainly pay the restoration cost here probably around twenty million if done with out graft the city found 92 million to restore Loews theater in Flatbush a beautifully done job, a financially solid non profit Charter School can handle on going upkeep.The time has come to reclaim what is now a eyesore and hazard to the block regardless of Mr.Singers own financial patience.