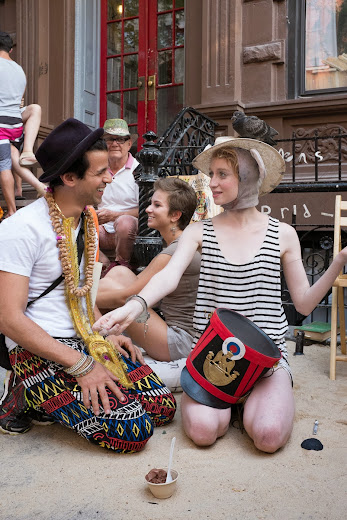 [Photo from August by James Maher]

Back on Aug. 27, we featured Ellen Turrietta in our weekly Out and About in the East Village feature.

At that time, she had been camped outside a building on East Seventh Street between First Avenue and Second Avenue for several weeks. She had set up a fake barber shop. And a leather shop, among other things. There was a surprisingly intense debate among readers about all this. Was it some kind of performance art? Or was she out there where the trains don't run?

Since then several readers told us about the existence of "Go Lightly," described on YouTube (and uploaded in June) as a "psychologically intense portrait of a former fashion model living in New York. This film explores themes of masochism and exploitation."

We asked Brooklyn-based writer-filmmaker Forrest McCuller a few questions about his "Go Lightly."

How did you meet Ellen?

I met Ellen while I was working at a coffee shop. I think it was in May.

I am usually guarded when I am working in food service. I am a writer. I do not have any small talk.

But Ellen is good at engaging people. She can slice through introversion. I found her to be an interesting and challenging person. She can express her inner world and make it vivid. She has a lot of insight.

That is a good word for it: insight. She looks inward to understand the outside world. It is a strategy with a limited applicability contingent on the breadth of the mind in question. Ellen has come a long way on her wits. It is egotism, but if you think that it is not practical I'd challenge you to go stand outside in the street for a month and see how you fare.

I am not saying that she is self-made. Few people pass that test. But the opportunities that she gets, at least as long as I've known her — and I think since she left home in her teens — she has gotten because she impresses people. She is sharp and straightforward. One thing I've learned watching her: you get a lot more out of people if you tell them what you want right away than by any underhanded plot. She lives off of that idea.

At what point did you know that you wanted to film her?

The first time I hung around with Ellen outside my job she told me about her life, and I told her about my filmmaking. I like to make documentaries with characters who seem unreliable. That way you get a notion of the person without the false sense of certainty that a lot of documentaries sell.

I described "The Fortune Tellers," a music documentary I made that does not attempt to sell music. Instead, it is a dark comedy. She liked the sound of what I was doing, and she mentioned wanting a film about her own life. Knowing what I knew about her life then, it seemed to me like any biographical portrait would be an exploitation film. I decided to make an anti-exploitation film.

I wanted to demonstrate Ellen rather than packaging her personality and selling it. The film is neither for or against her.

Did you give her any guidelines, or did she just start going?

I didn't give Ellen much direction while we were filming. I just talked to her. I wanted it to be as much like our previous conversations as possible.

It would not have been appropriate for me to give her too much direction. I would have been like a photographer demanding a model to strike postures. My intention was the opposite. I didn't want a model. I wanted to show Ellen.

Our feature on her generated 80 comments. What is your assessment of her?

She seems much healthier today than she was when I met her. She found a way to build a community around herself. I think that is helping her.

I understand people calling Ellen an anachronism in the East Village. Her performances aren't made to sell, and I suppose everyone is supposed to be scrambling for money right now (I won't speculate about her financial situation.)

But the problem with calling her behavior old-fashioned is that I don't know of any time when withdrawal from social etiquette has been broadly well-received. Ellen's ideals line up with her practices, and that happens to be a recipe for ostracism.

What are your plans for the film?

My plan for the film is to put it in front of a lot of eyes.

It's not an informational doc. It relates a tacit experience. For people to understand it at all they have to watch it.

The "film speak" was irritating. It didn't help describe what he wanted to achieve with the movie, what the point was.

He says he just wants to 'demonstrate' Ellen and sounds like he wants people to be nice to her and accept her... but buy his film! No free 'demonstrations', folks.

And who the hell ever called her behavior "old-fashioned"?

No mention if he figured she was mentally ill or not. That would be interesting for me to hear about. He kind of hinted at it but was not being direct.

I don't know about this guy.

I knew a few people like her when I was in art school back in the day. People lived their art, lived on the edge and the more visual they were the less they could convey abstract ideas verbally. This young woman gets more attention from people due to her looks and all the alarm about her "state of mind" would be less is she were ordinary looking.

The filmmaker says his movie explores masochism, exploitation and abuse. He left out sadism, exhibitionism and narcissism, but otherwise that description sums this whole project up nicely.

I gave the trailer a chance. But this "film" looks totally boring. It's nice that someone in 2014 East Village is attempting to do "art". But where's the artistry, where's the talent? Is that not prerequisite anymore? This "film" seems to me like nothing more than a very self-absorbed grandiose twenty-something chick sitting around the apartment yappin' about herself.

I agree that if this girl did not look the way she does, she would not have so many people fawning all over her. I don't find what she has says to be interesting, nor is it particularly original. Anyone who has been to art school, or worked in fashion has come across people like her. I have to hand it to her, she certainly has a lot of people (mostly men), giving her a lot of publicity. She definitely has a talent for promotion. She should consider gingo into PR.

you know, i can read the Beats and feminist critical theory and talk like i know things too! anyone care to spend $5 on a 30 minute piece of garbage youtube movie?

"insight" is perhaps the last word i would use to describe this woman. childish, immature, pseudo-intellectual rank much higher on the list.

She reminds me of a young Molly Ringwald, and I see she won an art scholarship when she was 17.

Is she still modeling now?

Can someone tell me what is it about her life that's noteworthy or documentary worthy?
I didn't get any info about her life from the interview.
There HAS to be something to her.
I mean, 80 (EIGHTY) comments from EV's "Out and About" piece…that's something, eh?

"Can someone tell me what is it about her life that's noteworthy or documentary worthy?"

yes. ev grieve has a hard-on for her.

When you piss off a whole block for a month, you're going to generate a lot of comments.

Here's a video clip of Ellen Turrietta naked, covered in black ink, giving some guy a foot massage and drinking a glass of wine while expounding on the state of universe. Near the end some other guy walks in on them to refill her wine glass and she asks about getting some acid. It's time for another James Maher followup, an intervention, or both.

It’s a film about people in the East Village in 2014. So yeah, self absorbed, vapid, rich. I’ve seen it, and it’s a good document of the times.