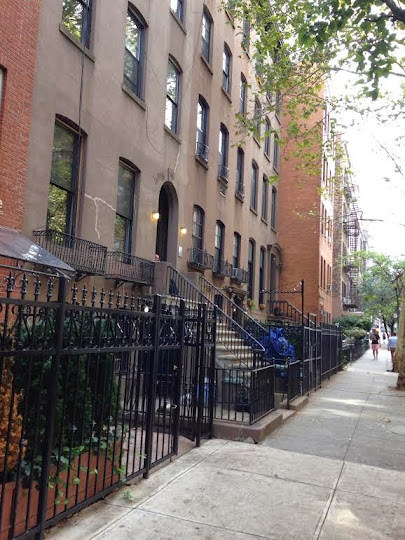 The city approved permits to renovate some of the units in May. At that time, a neighbor told us that the building between Second Avenue and Third Avenue was now tenant-free as the gut renovations began.

Apparently that was not the case, though.

A different neighbor told us about the recent arrival of security guards at 222's front door.

The neighbor relayed the following: "I live a few doors down and asked why there was a security guard, and a tenant said that the building owner was trying to force tenants out using the construction and that the tenant had succeeded in getting the Department of Buildings to halt work. I've never seen a security guard outside a building before for this reason."

According to one complaint (in the DOB's ALL-CAP style):

THE OWNER OF THE BUILDING LIED TO THE CITY CLAIMING THE BUILDING WAS EMPTY IN ORDER TO OBTAIN A PERMIT TO DO CONSTRUCTION ILLEGALLY. THERE ARE 7 TENANTS STILL LIVING INSIDE THE BUILDING.

And the other complaint:

CONSTRUCTION WORKERS ARE CONSTRUCTING LUXURY APTS INSTEAD OF NECESSARY REPARS., NO TENANT PROTECTION PLAN FOR ALT

Have other tips or photos about the situation here? Please send them our way via the EV Grieve email
Posted by Grieve at 5:06 AM

How low can one landlord go?

well, he hasn't burnt the place down yet. the 70's landlord tactic

Beware of Icon in your neighborhood, on your block, in your building. They make for terrible owners, terrible neighbors. Remodeled and renovated apt building at 205 Avenue A last winter adding rooftop and backyard party decks then rented to frat type party tenants. Icon was completely unresponsive to neighbor complaints about noise, loud music, rooftop dj until we got the 9th Precinct involved. Icon is the worst.

The owners of Icon Realty are scumbags. Greaseballs! Gives The Sledgehammer a run for his money.

Wow, the DOB actually did something to help Jane & Joe New Yorker! Way to go, DOB! Please please please keep it up.

I spotted the guard standing at the door today, he looked bored.

So why is the security guard there? Is he making sure strangers don't walk in while the construction workers are going in and out, or is he there to give the tenants a hard time?

@Anon @ 1:47pm - Sorry, but Ryan Gosling did NOT live next door to this address; he was elsewhere on the block, but he moved out several years ago.

@Anon @ 5:35pm - It's not a security guard, it's a "fire guard" b/c while renovating, they disabled the sprinkler system in the building, and the street-facing rooms have no fire escape.

The point is this: The building is an SRO, and Icon knew that when they bought it. They seem to have bet that they could buy out (and or harass/scare out) the remaining occupants, but multiple rooms remain occupied, and SRO tenants have pretty strong protection under the law.

The building's SRO status is why no one in their right mind would have paid that much money for the place. It was on the market multiple times over many years with no takers until Icon. (At one point it was advertised for sale as a "townhouse" - guess what, it's not a townhouse!)