An 'East Village Eye' mini-symposium, plus back issues and T-shirts 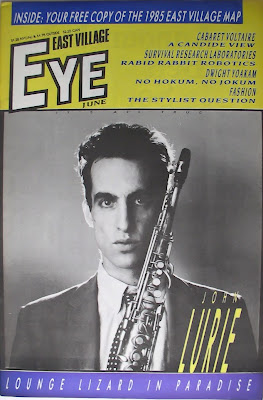 Ugh. Sorry for the short notice on this. My fault! This free event is tonight 6-8. Via the EVG inbox...

The East Village Eye Archive, in conjunction with Printed Matter, Inc., presents the First "Officially Sanctioned" Back Issue Selloff, in which selected copies of the East Village Eye magazine will be put on sale to the public ... as well as several fabulous t-shirt designs sporting historical East Village Eye covers.

East Village Eye was a monthly magazine that produced 72 issues from 1979 through 1987, focusing on the music, art, film, words, performance and social movements of the era, much of which was being made in the neighborhood it called home. The magazine is known today for its uncanny and prescient sense of culture´s evolution and direction, fluidly moving between the street, the avant-garde and the world at large.

To mark this big selloff event, we are presenting a mini-symposium entitled “How Hip Hop Came Downtown,” covering the process in which members of New York’s media and fine art communities brought rap music, graffiti art and breakdancing from the inner-city ghettos to a wider audience that has since spread across the world. Leading this discussion will be Eye publisher/editor Leonard Abrams, scholar Yazmin Ramirez, musician and multimedia artist Michael Holman, and Fab 5 Freddy.

Previously on EV Grieve:
Q-and-A with Leonard Abrams, publisher of the East Village Eye
Posted by Grieve at 11:53 AM