A memorial for bendy tree in Tompkins Square Park tomorrow 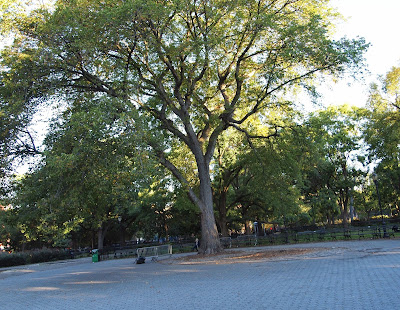 [This morning in Tompkins Square Park]

Rev. Billy and East Village residents are meeting tomorrow afternoon from 2:30-3:30 to hold a memorial for the leaning elm that the city removed last Saturday. From the EVG inbox…

The memorial will involve testimonials from residents of the community, including community garden, environmentalists and artists. The Stop Shopping Choir will sing.

The beloved 130-year-old elm was suddenly chain sawed on Saturday the 20th. Mystery surrounds the action taken by the Parks Dept., as the tree was healthy, not "structurally unsound" — as described in an anonymous sign. Bendy leaned to the east, as she has for more than a century.

The NYPD arrested Rev. Billy last Saturday after he tried to prevent workers from cutting down bendy tree. The NYPD charged him with Obstruction of Government Administration (he pleaded guilty), and sentenced him to time served — about 14 hours.

That's it for bendy tree

No mystery surrounds the action. The tree was not safe.

Having a memorial is fine, but this tree needed to come down.

Please show us your certified Arborist degree so we can know that for once, you know whereof you speak.

Sooooo.... Why isn't this memorial a planting of a new healthy tree???

I agree, getting a new tree makes more sense for a memorial. The hand wringing over "bendy" tree is just over the top--I mean are they going to create a shrine there with dopey candles and dead flowers now?
We need more trees in that park, period. Who would you contact? What would the costs be?

ya, people need to get a grip.

Typical- no memorials for homeless who've died around the park but all this for a tree . I just don't get it. I guess trees are more valuable. I guess in the new NYC that's how it goes.

Sorry to come in so late, but people forget that city agencies and institutions are generally motivated by covering their legal liabilities rather than protecting anyone. I doubt that anyone will ever know whether the bent tree would last another 40 years or forty days, but I would as soon take the word of a city arborist as a Ferguson police dept spokesperson for an instance of police violence or an armchair amateur arborist. The tree had healthy leaves, as i recall, so it may have merited some further effort to save. (The complaint that it was hollow inside doesn't seem particularly telling. Some hydrocephalics have average inteeligence with less brain than the tree had pith.)

It should not be ignored that the bent tree was not just unique in the park, but a unique feature among trees in city parks. Kids used to run up it, so it did merit some special attention. It is not likely to be replaced by another bent tree. (-; That there are more pressing problems in the world is no doubt true, but not a reason to avoid questioning the destruction of something of value in your backyard.