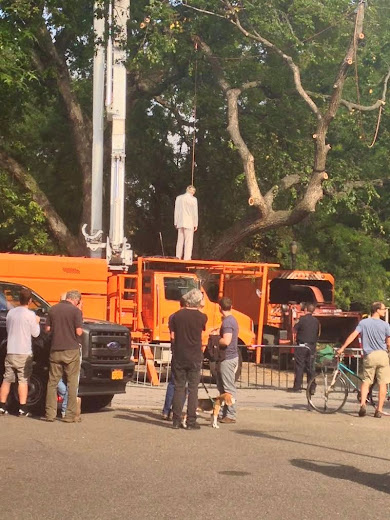 Rev. Billy arrived this morning at Tompkins Square Park, where workers are cutting down the leaning elm in the middle of the Park.

He stopped work when he climbed atop one of the trucks… 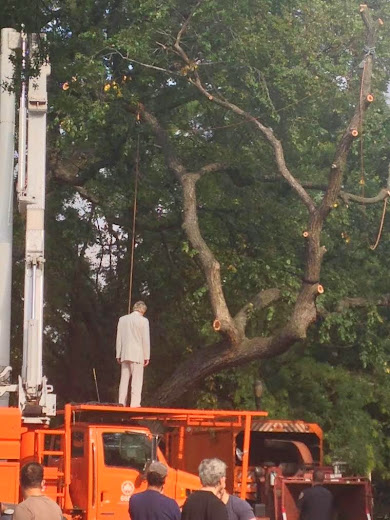 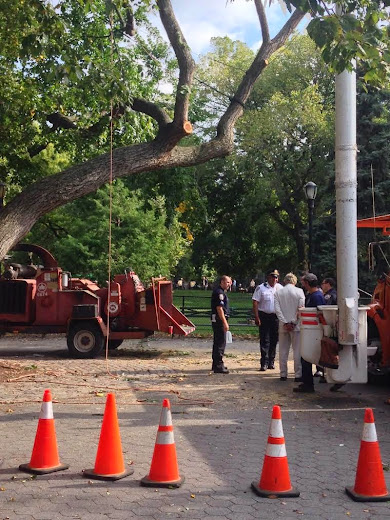 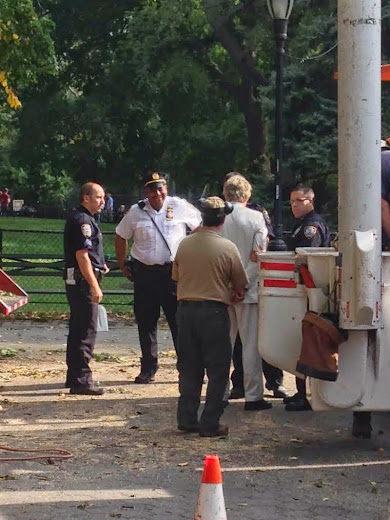 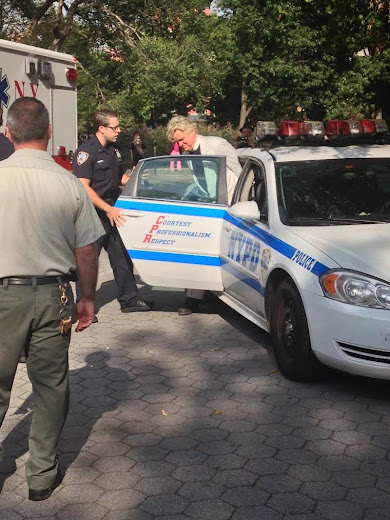 … then work resumed on cutting down Bendy Tree… 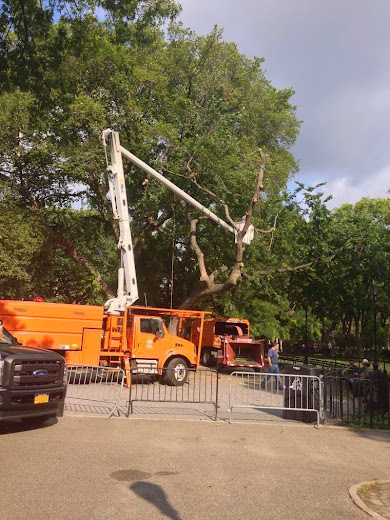 As previously reported, an arborist hired by the Parks Department found the favorite tree structurally unsound and recommended that it be cut down.

Bendy-lujah
Posted by Grieve at 10:14 AM

In the first image it looks like he's being lynched. Just saying.

in that first photo, the rope lines up with the neck just so... grimly!

It's sad to lose this tree. Many, many, many years ago when it was a young tree, it should have been staked to force it to grow straight and not at such a severe bend. I loved bendy tree, but it does pose a risk to passerby, especially during or after a big storm.

I guess with the photos of the hole in the center of the tree, you can no longer credibly put quotation marks around "structurally unsound".

I was quoting the sign… that's all. The sign said the tree was structurally unsound. By putting quote marks around it, I was indicating that these weren't my words.

Grieve - Everyone knows what scare quotes are.

I just got back from video taping the removal of the tree (as well as shooting events going on in the gardens for the Harvest Arts Festival). It'll be some time before I can post it, with everything that's going on this weekend, but it'll go up eventually. I'll send the link.

Regarding Talen's performance, I don't think it's accurate to say he was trying to stop them from cutting down the tree. He was by himself and had no props (a chain and padlock, for instance). Even people who supported him were calling for him to stop. He did manage to delay things, but that's all.

Except me, apparently. Noted for next time.

That tree was a true east villager, our eccentric neighbor, and we should have made space for it.

I am so grateful for the good Reverend, who once again takes the heat for being the conscientious stand-in for all of us who object to this stupid, typical gentrification-disguised-as-safety.

whats wrong with cutting down dying trees? its not like they are putting a starbucks in its place. Trees have life cycles too.

How many kops does it take to arrest ONE Reverend Billy????