Sammy’s Roumanian Steakhouse: Still got it? 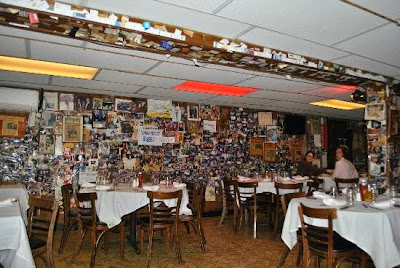 At the Times, Pete Wells files a review on Sammy's Roumanian Steakhouse 157 Chrystie St. near Delancey.

He calls Sammy's "the most wonderful terrible restaurant in New York."

The rest of the Lower East Side can obsess over filament light bulbs and salvaged barn beams; Sammy’s, virtually unchanged since opening in 1975, will be ready when fluorescents and drop ceilings make their triumphant return to fashion. Inside the dining room, lighted like a bail bondsman’s office in Detroit, are hundreds of faded business cards, yellowed newspaper clippings and curled snapshots taped and tacked to every surface. Outside on Chrystie Street, scaffolding obscures the faded red and yellow painted signs in front of the building, which looks as if it has been marked for demolition. Like a Mississippi juke joint, Sammy’s seems to have been put together under the theory that nobody is likely to stay sober long enough to inspect the décor. (Known for selling vodka bottles encased in ice, Sammy’s is New York’s original bottle-service restaurant, and still the only tolerable one.)

Read the whole review here.
Posted by Grieve at 7:30 PM

Email ThisBlogThis!Share to TwitterShare to FacebookShare to Pinterest
Labels: Sammy’s Roumanian Steakhouse, still got it

I haven't been there for years. Have been meaning to take a friend who loves his meat and potatoes.

Still full of schmaltz, I'm sure.

I've been on personal campaign to visit and patronize all the old NY places like this which remain. If I see a line of foodies or people clutching guide books near the front door I keep walking. Food tourism has made it impossible to eat at so many newer and good neighborhood eateries. Once a favorite place is blogged about I scratch it off my list of eating options. Food tourists are usually to dumb or clueless to realize when a restaurant has a "B" from the health department its not a good thing. Those signs can be seen in the window of foodie paradise Momofuko and other but that doesn't matter since it is more important to say you went there, it was "amazing" and have photos on your iPhone of every dish you ate.

And here's the frightening detail of Mr. Wells review;

"One night, I went with a woman who had spent the summer in Europe, as synagogues and Jewish-owned shops burned in one city after another. In Sammy’s basement, when strangers joined their hands in the air and danced between the tables, eyeing our food as they passed, I could see her grow less tense every minute. “It feels so good to be back in a place where I can be out,” she finally said."

It's not cheap, but is certainly a fun night out. And egg creams made the right way (but still no pretzel).