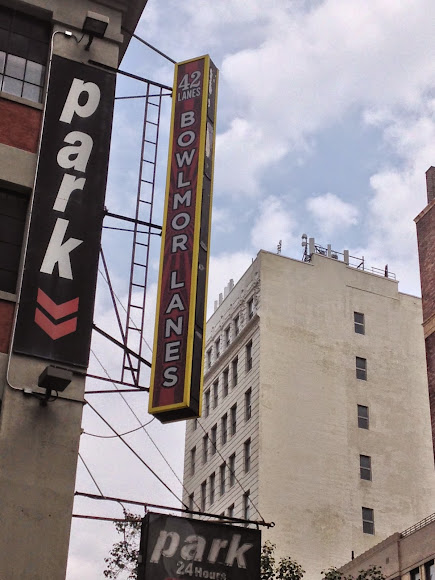 After 76 years in business at 110 University Place, Bowlmor Lanes closed for good this past July 7.

Bowlmor was the last of the businesses here on the west side of University between East 12th Street and East 13th Street to clear out to make way for some unspecified luxury development via landlord Billy Macklowe, who bought a long-term controlling position in the building back in 2012.

Per New York Yimby, who first reported on the filing:

Residences at 100 University Place will be slightly smaller than those inside its new neighbors, with 107,965 square feet of residential space split between 52 apartments, resulting in an average unit size of just over 2,000 square feet – still very large, especially for Manhattan standards.

SLCE is listed as the architect of record.

And what about SLCE's work?

SLCE ... has a track record for building sorta boring but not offensive apartment buildings and hotels ... But will whatever design they produce offend the neighbors, because of its sheer height (309 feet) amid a low-rise neighborhood? All bets point to yes.

Bowlmor says goodbye
Posted by Grieve at 5:02 AM

Really -- 23 stories and not one complaint?

Seems way out of place for the site.

Yes, you may take that both ways.