Out and About in the East Village, Part 1 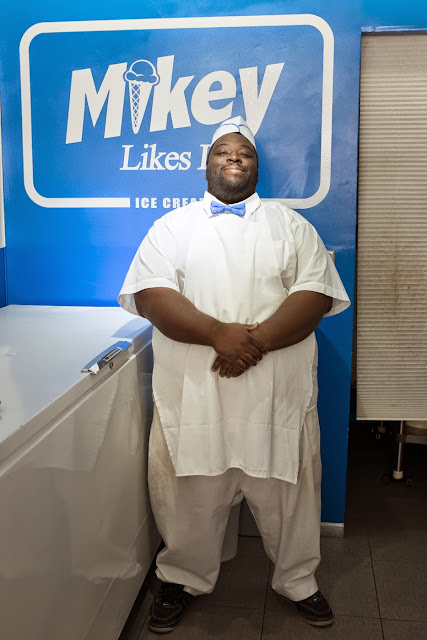 Thirty-Five years ago, born and raised on the Lower East Side of Manhattan. I grew up in Stuyvesant Town, across the way. My parents are from Sierra Leone, West Africa. [They came here] when they were around their late 20s or 30, I think.

They tried to teach me lessons that I didn’t really know. They tried to be very rigid when I was a child, which kind of also makes you want to venture off and see the crazy side of the world. My mom was a nurse. My dad worked at the supermarket and then he worked for the City of New York. He carried like two, three jobs and my mom had two jobs, so sometimes they wouldn’t see each other for two or three days. I see my parents work hard and that’s what instilled the value of working hard myself. They tried to get me what I needed. I wanted them Jordans, ‘You’re getting the Avias.’ Damn. But they’re sneakers, so, you know? I’m glad that they instilled a hardworking value in myself.

As a child the neighborhood was cool. You had to stay out of trouble. You went anywhere around here and there was trouble up and down. I remember Friday the 13th or Rookie Day, that’s what we used to call it. It was real. I would get out of school at PS 19 and would go outside and be like, ‘Man, this is some fake bullying holiday.’ There were like 60 kids waiting outside to pummel you. You were like, ‘Damn, I’m gonna have to pull the Barry Sanders off to get home.’ But it was definitely fun growing up.

From Avenue B, 14th and Avenue B, the Campos projects there, they always had problems with the kids from Avenue D, which was two blocks from there, so when you came down to this area people didn’t want to venture off past Avenue B. Even Avenue A was tough. You would get off the train and just stay on First Avenue until you’d find your street and then you’d turn left or right. People rarely wanted to come into these areas. On 14th and First, there was drug dealing going on and clashes between people. In the 80s, even the 90s, you’d come outside and there was always something going on. You’d walk outside and walk down 13th Street and there was a bunch of people hanging outside and drinking on the stoop.

What was cool was the competitiveness. Kips Bay, up on 28th Street, these guys played basketball. Then you’d get the kids from Campos, Avenue D, 12th Street, 6th Street, who would play basketball. So all of us would roam around with our own teams of five. You’d roll five deep. After you’d lose, ‘Okay lets pack it up, let’s go over here.’ That’s what the weekends were like. You’d get to know other kids because we were all playing basketball. We all did the same damn thing anyway. You might not know their names but you’d say what’s up walking by. I can’t really walk down the street without someone saying, ‘Hey Mikey, how you doing?’ Now I have the store but way before that it was like that.

I got into ice cream because of my aunt. [Yesterday] was her birthday. When I was younger she would take me to school in the morning. Her name was Luciana but I called her Lucy. She was on my mother’s side. My grandfather was a chef on cruise ships, so my aunt came over and all she wanted to do was learn to cook just like her father.

So when I was in the third, fourth, fifth grade, since my parents weren’t home, I would sign up for Boys Club and go there a couple days a week. But my parents still didn’t want me out, so I was forced to go to cooking school with my aunt. I was the kid in the corner who would sit at the table with a whipping bowl or something smaller. Because of that, I was intrigued with cooking at a young age.

When my parents left me at home, my mom would leave like five dollars. ‘Get some pizza for you and your sister,’ and I’d be like, ‘Let’s not get pizza today, lets go to the supermarket, see what we can get for five bucks and make something.’ I made some nasty tasting ramen noodle experiments. But one day I was like, ‘I’m not eating like this anymore, I’m going to eat good tasting food’ and I just sort of learned cooking. Growing up, I became the kid that, showing up at any barbeque, and people were like, ‘Pass Mikey the tongs!’ I would be anywhere. I would be like, ‘Hey guys, I’m hanging out today,’ and it would automatically become, ‘Yo, Mikey’s cooking burgers.’ Everybody’s running to the grill.

I went to high school in Rhode Island, and then I ended up going to Johnson and Wales culinary course out there when I was in high school. I wanted to cook all the time. My mom would leave and my dad would be like, ‘I’m glad she’s gone, you’re cooking tonight.’ Then my aunt Lucy passed away. When she passed away my parents sent me to her apartment to clean. So I’m cleaning up the apartment and I saw four or five cookbooks up in the shelf. I’m short and I tried to reach for it and all the books fell and one of them opened up to an ice cream recipe and she actually was writing one herself. The school would make her write menus and stuff.

So then I came home, went to the supermarket, bought all the stuff and tried making the ice cream. I didn’t have an ice cream maker, I didn’t have nothing, I just did it in a freezer with a bowl and would stir it every half an hour. The texture came out disgusting, but the taste was kind of old school. It was like Julia Childs type stuff, but it needed to get some Mikey [influence]. So I sat there and started researching.

That recipe from my aunt is actually the base of ice cream that I use to make all these ice creams. The flavor is me giving it flavor on the top.

Next week: Mikey Cole on starting the business from home. "We’d be at my house for hours filling up the freezer with ice cream until my mom was like, ‘You gotta get that shit out of here.’

Great interview! I can't wait to hear more. I like this guy.

I am so enjoying part 1, can't wait till tomorrow.

I really hope his shop is successful. Lots of hard work and passion wih this young guy.

One of the best Out and Abouts!

"We’d be at my house for hours filling up the freezer with ice cream until my mom was like, ‘You gotta get that shit out of here.’

I'm laughing all the way over there to pick up a few pints.

I think I'm gonna go get some ice cream from Mikey and I don't even really eat ice cream!

his store is too small, there are only two stools. but the ice cream is very big in flavor and everybody there is friendly. mixing ingredients i never thought i'd put together like strawberries, vinegar, and pepper. really? it's delicious, creamy, rich. $4 might be a bit steep for a scoop but it delivers a lot of taste.

I got a cone on my way to vote on Primary Day and hung with Mikey's associate, Pete. (I think the staff is pretty much the two of them.) Great place. Viva ice cream! Some of us had to wait for it to make its comeback against gelato.

I LIKE MIKEY!!!
These are the businesses we need to support!

What a great guy. I love hearing the story of how he got into cooking.

Mikey is awesome and I love his ice cream!

Yeah man! Local kid opens a shop in the local community!
NYC should be shouting from the rooftops this dude's story....
SUPPORT THIS SHOP!

I don't really eat ice cream, but my son, who knows his way around sugar, says it's the best cone in town. And shakes too.

hell yeah to this guy! looking forward to checking out his shop and to the next installment!

Take that, froyo in a hoof.

I'm totally sold now and will definitely stop in and check out Mikey's shop. You got any vanilla and peanut butter?