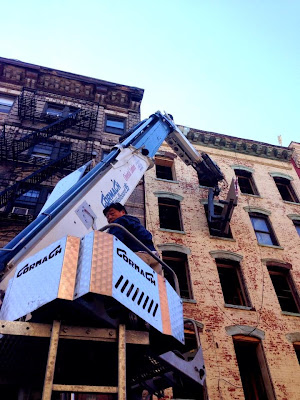 Three flatbed trucks with sheetrock arrived here yesterday on East Sixth Street between First Avenue and Second Avenue ... where Rory Denis remains the only tenant in the building at 338 E. Sixth St.

He has lived in a rent-stabilized apartment here since 1979.

As DNAinfo reported last October, Denis stayed in his apartment despite the best efforts of landlord Nurjahan Ahmed.

Denis reportedly took Ahmed to housing court last year after she switched off the electricity and water. Denis won the case in June 2013, which forced Ahmed to restore the services.

Word here now is that workers have installed the new electrical wiring and plumbing. (DNAinfo reported that the gut renovations began in May 2013.) 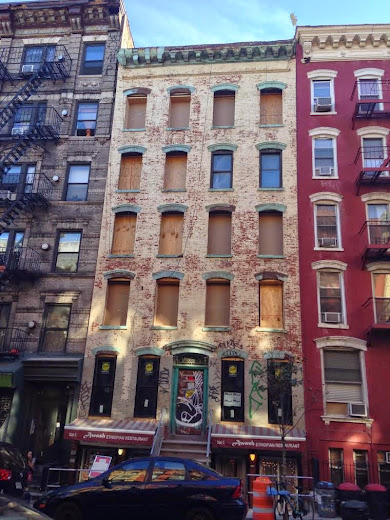 Previously.
Posted by Grieve at 5:03 AM

Unspeakable horror. Landlords like this one need some prison time.

16 months? It took 'em a year to build the Empire State Building. I do hope Rory was the triumphant fly in their ointment that's making it drag on this long. I second Anon. 8:46, this piece of crap landlord needs to wear prison orange for a while. Too bad it'll never happen.

DOB, become strong and just! You have been too pathetic for too long. Humans of New York City need you to ENFORCE!

DOB is, unquestionably, the worst city agency we have. I've never heard an elected address this issue, but only sighs, like it's never going to change and don't bother trying.

If there is anything positive to be said about the DOB or this despicable landlord, its that I was the one who called 311 after seeing debris being thrown out of 5th floor windows, nearly missing pedestrians and landing on top of parked cars, and they actually responded. I live next door and I was afraid to walk out of my door, fearful of what would come flying out of the window next. I work in construction and manage multi million dollar restoration projects throughout Manhattan, and I have the DOB all over my jobs all day long. Meanwhile these guys are able to fly under the radar. Throughout the entire construction practice, this site has been devoid of any safe work standards.

How can they be working on this building without a sidewalk bridge? Someone should call that in!