Some reports on Boilermaker, now open on 1st Avenue and East 1st Street 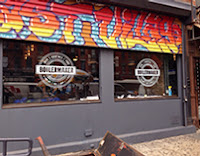 The owners revamped the space for another retro creation called Boilermaker, which is now open ... and enjoying press galore.

Here's a look at some of the previews/reviews.

First, Fork in the Road:

If design details and personnel are reminders of the previous concept, though, the menu couldn't be more different. Boilermaker takes its cues from a different era, the late 19th and early 20th century, when dockworkers would hunker down in bars for a post-shift beer and a shot, usually whiskey.

And the Daily News:

[Y]ou can try an All American ($6) which is Narragansett Lager and a shot of Ancient Age Bourbon, and groups of three or more can order the Bucket of Boilermakers ($45), that comes with a six-pack of Miller High Life and six shots of Buffalo Trace Bourbon.

The bar features cocktails on tap, like the the Uncle Jalapeño ($10) with tequila, jalapeño and pineapple soda. Or get nerdy with the Ken Burns Effect, which is a stirred drink with rye whiskey, oloroso sherry, maraschino liqueur and Angostura bitters.

“I asked people what they’d be willing to pay for a cocktail or beer and lowered it by a dollar,” says Greg Boehm of Cocktail Kingdom, one of the co-owners.

And here's the drinks menu that we borrowed from Gothamist...

End of the road: Golden Cadillac closes tomorrow night (29 comments)
Posted by Grieve at 4:50 AM

I give this one 8 months.

Sounds like a fun place! Which means people here will hate it.

Ha, good one, @7:28. You're implying that "people here" don't enjoy "fun." Witty, incisive, smart...all rolled up in a snark! And apparently meant to provoke, so that makes you a "troll!" Mission accomplished...Good morning!

Anonymous 7:42, I'm not saying that people here don't enjoy fun, just that their fun is tearing down other people's fun.

If this guy asked people what they'd pay for a drink and lowered it by a dollar, then I'd like to know who, exactly, said they'd pay $7 for a Narragansett.

Perfect for the discriminating dockworkers with an impressive trust fund.

Full disclosure, when I was 20, the concept of a Bucket of Boilermakers would probably have appealed to me.

Now that I am not 20, the concept of wading thru the vomited-up Buckets of Boilermakers when I try to walk my dogs in the morning does not appeal to me.

And by the way, even at 20, I did not vomit all over the place like these kids do, nor did I feel the need to yell wooooo at the top of my lungs, even after a Bucket of Boilermakers. Or 2 or 3 such buckets for that matter.

If that makes me a great man, so be it.

@Anon. 7:42. Love you. Anon. 7:28 and 7:57, one and the same I am sure, "fun" as defined by people who actually LIVE in the neighborhood is a far cry from the fratty broho "fun" we have to endure on the part of self-absorbed transients. Screaming wolf packs of obnoxious drunks stumbling around when the bars close (all-too-often to wind up on a rooftop where they can disturb people for blocks around while they rave), vomit-stained streets, questionable alcohol-fueled costume events (hey, since this is a late 19th/early 20th century theme bar, will they be hosting a Typhoid Mary-Con?), fighting and yelling in the streets - this is not "fun" by most people's definition, but maybe you know something we don't? If so, please share. And I ask again re Boilermaker, where is the food? Why is there no emphasis on anything but the alcohol? That right there tells me pretty much all I need to know about this place, which will doubtless be churning out lots more drunks to add to the already overflowing - in more ways than one - hordes.

ive been known to enjoy a nice cocktail bar every once in a while, but your statement of people here's idea of fun being "tearing down other people's fun" is terribly ironic with the quite real demolition going on in the neighborhood over the last 5 years that's let things like this place flourish. not sure you can "tear down other people's fun" any more literally.

Actually the prices are pretty good for the beers they are selling. Hard to get a $6 pint now for anything decent (@DAN LD:The Narragansett comes with a shot for that price). I'll give it a try on off hours.

I always get turned off by any pre-release hype from the big publicity machine, whether it's a movie, album, TV show and so forth.

All the articles about Boilermaker carry the same publicist blather about taking cues from bygone eras, blah blah blah.

I'd rather a place open in a more organic fashion, carried by word of mouth. But that is not so realistic in today's real-estate market.

The resultant publicity turns off locals because the place initially fills up with thrillseekers from other neighborhoods and tourists. When they move on to the next hyped thing, the local place is left to die.

Places like this one are the sad reality of what passes as cool, hip, and trendy for some of our newest neighbors. Themed out until it closes in 8 months to be born again with a new theme equally not cool, hip or trendy. I was never a fan of drinking for drinking's sake but future alcoholics get to use the word "fun" to disguise "problem" until their friends grow out of it but they don't.

what happened to the food? wasn't this approved by cb3 as the golden cadillac with a full menu?

has a method of operation application been filed with the SLA?

whether or not matters not. if someone wanted to read a book they'd go to a library. wait, oops no-one uses either of those anymore.

you need an app to get thorough that drink list and the notion belies the reality.

"Zombie - MAXIMUM TWO PER GUEST." I love that they're anticipating needing to cut people off before the place even opens. Trainwreck. Avoid.

We get it:
Jello-shots for the "brahs"; Boilermakers for the "hipsters".
Check.

They have food, it's not listed on the cocktail menu.