At the rally for PS 64 Sunday 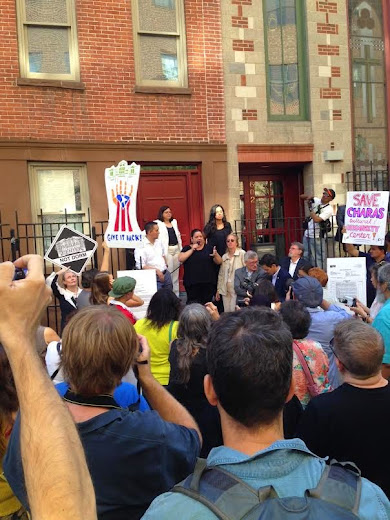 On Sunday afternoon, nearly 200 residents along with a handful of elected officials gathered on East Ninth Street to discuss the future of the former PS 64 and CHARAS/El Bohio community center.

As reported last week, the Department of Buildings has put a stop, for now, to developer Gregg Singer's plans to convert the long-emtpy building between Avenue B and Avenue C into a dorm.

The DOB had approved Singer's application to have tenant Joffrey Ballet considered a not-for-profit with housing accommodations as opposed to a dormitory. However, Joffrey is not a nonprofit, meaning the lease did not meet the DOB's requirements for educational institutions.

Some residents want to see the building returned to community use.

Karen Loew has a rally recap at Off the Grid, the blog of the Greenwich Village Society for Historic Preservation.

Said Manhattan Borough President Gale Brewer at the rally: "Every neighborhood needs a strong, vibrant community center. Every neighborhood does not need a dorm. If we don't have the art and culture that this community is known for, we do not have our mental health."

There are many more families here who need a public school than when back in the day when PS 64 was decommissioned.

Times have changed and we don't need another luxury apt building, or a dorm for passers-thru who will contribute nothing to this neighborhood.

We deserve the school, in the very same building that was architecturally designed to be a school, right here in our neighborhood, where our children can learn without being crowded into the Szold Place school or shipped elsewhere.

I love the idea of turning this into a school. A school can serve a community in many ways, not just the kids who attend Monday thru Friday. If community groups could rent or use classrooms when the kids are not using them during the day then that would be the icing on the cake.

This is one bit of uproar I don't really understand. There's simply not enough demand in the neighborhood to reopen the space as a new public school, and it's about 30x too large to be a "community center"...

So what are the options here, really? Let the building continue to rot? Tear it down and build high-rise condos? Frankly, I think a dorm seems like a great use of the space - maybe with part of it dedicated as a community center. The dorm plan keeps the building intact, won't be an eyesore, and it keeps the nature of the community the same. And don't tell me the place is getting overrun with college kids - the East Village has been housing students a lot longer than it's been housing you.

Go to hell no more dorms.

or hybrid of any of the above