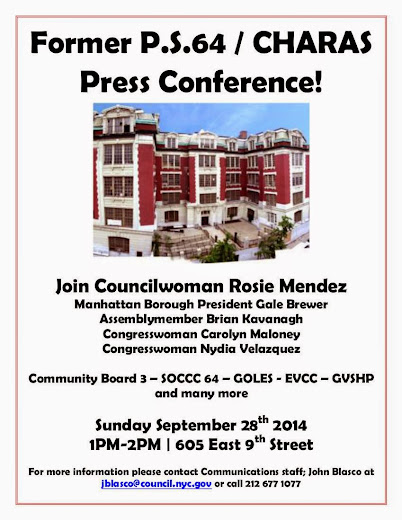 As noted on Wednesday, the Department of Buildings has put a stop to developer Gregg Singer's plans to convert the former PS 64 and CHARAS/El Bohio community center on East Ninth Street into a dorm.

The DOB had approved Singer's application to have tenant Joffrey Ballet considered a not-for-profit with housing accommodations as opposed to a dormitory. However, Joffrey is not a nonprofit, meaning the lease did not meet the DOB's requirements for educational institutions.

Councilmember Rosie Mendez and other local elected officials will discuss this latest development during the press conference.

Cool. Something worth attending on Sunday afternoon!

Watch and see how Carolyn Maloney goes off the local PS 64 issue by citing her position on gun control or something else. She does this all the time at the STPCV TA meetings. I’m pretty progressive but she is a joke, a Dem who owns her job due to Gerrymandering.

Maloney wasn't there, but Nydia Velazquez (whose FORMER district included PS 64) was.