As the Hotel Indigo and Mr. Purple continue efforts to be part of the LES neighborhood

We’re toasting to a new neighborhood to explore + new discoveries made at #mrpurplenyc. Cheers! #HotelIndigo pic.twitter.com/VI0CFMDKgQ

The recently opened Hotel Indigo on Orchard Street continues to try to make inroads with the local community. The latest effort: a nighttime light show titled The Color of Discovery.

From the press invite:

With the launch of The Color of Discovery, the Hotel Indigo brand is set to expose consumers to a one-of-a-kind, community experience like never before. The Color of Discovery leads travelers to explore and discover the local neighborhoods of each Hotel Indigo property through a series of mnemonic reveals. The brand’s message is to deliver a unique boutique experience at each location and the color Indigo is the emblematic of each unfolding adventure.

To launch this campaign, Hotel Indigo Lower East Side New York is hosting an event exposing the culture of the Lower East Side (complete with graffiti art, performances and neighborhood elements) while partnering with Dawn of Man and Lee Quiñones to bring the new campaign to life in a truly imaginative display of 3D projection art that incorporates the signature Indigo mnemonic, thus revealing each aspect of the local scene. 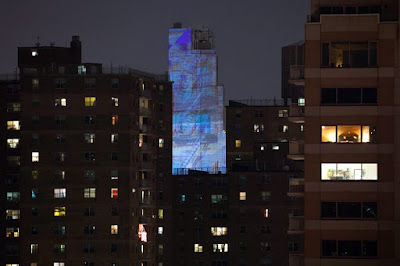 At one point, it looked like the projection of an old tenement projected on the new building that the Hotel Indigo replaced. BoweryBoogie noted this morning that this Color of Discovery is helping the hotel further solidify "its sense of self, you know, just in case you didn’t realize the towering 23-story building was there."

Then there is the hotel's 15th-floor bar called Mr. Purple.

According to initial reports, the bar, featuring an outdoor pool, was named after Adam Purple, the well-known Lower East Side environmentalist and activist, who died on Sept. 14 at age 84. (The Gerber Group, who operates the bar space, later seemed to backtrack on this.)

On Nov. 24, a rep for the Gerber Group sent us the following statement in regard to Mr. Purple to show that they are committed to supporting the local community:

After posting this statement, we heard from Russ & Daughters, who wanted to set the record straight:

Part of this relationship also included Mr. Purple donating a $1 to the Mission from every drink sold on Thanksgiving eve and Thanksgiving.

Meanwhile, in a report yesterday, BoweryBoogie noted further tension between the bar and some local community members, particularly those who were friends with Adam Purple.

Multiple sources tell us that there was actually a meeting earlier in the year between Adam Purple and the Gerber Group. While the hotel was still under wraps. Purple apparently never gave them permission to use his name or his likeness and did not sign any documents to that effect.

We hear whispers that a large contingent wants to approach the hotel with positive solutions ... If the hotel is open to hearing these ideas and willing to speak with a representative from the community, they are saying, then there might be a way to honor Purple’s legacy, and at least might make a clueless concept a bit less offensive.

The short list of ideas includes asking the hotel to create a proper memorial in the bar with a display of photos and info about Adam, taking the “Mr. Purple Burger” off of the menu [Purple was a devout vegetarian] or replacing it with a garden burger, and educating the staff on the real story of Adam Purple.

For the time being, New Year's Eve reservations are now being accepted at Mr. Purple... 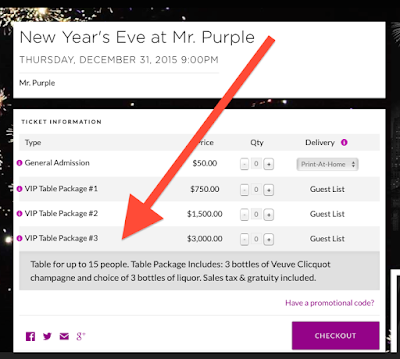 Previously on EV Grieve:
[Updated] The upscale hotel bar with a pool named for the late environmentalist Adam Purple

[Updated] The Gerber Group responds to criticism over Mr. Purple
Posted by Grieve at 4:30 AM

STILL DISGUSTING. And the Mr. Purple burger? C'mon? It's like they meant it to be as offensive as it is. Rich people shit on everything and everyone and then act like they're doing people a favor just by merely existing. Filthy ugly capitalists!

But does the Mr. Purple Burger come with bacon and fois gras? Who do they think they are fooling? They are just using local personalities to market a luxury hotel. If artists like Lee Quinones are getting paid to work with them that's great, but using someone like Adam Purple, who isn't even alive to defend himself anymore, and slapping the name of a well known vegetarian on a burger is beyond crass and clueless, and they need to address this.

Un. Real. This is textbook of example of how not to play karaoke with someone one else's class for profit.

If the Onion were to ever lampoon the concerns of the so-called "NYC Blog Mafia," this would be that piece. Astonishing how clueless some people are. "Authentrification" -- like Devolution -- is real.

At the beginning of this post, I thought I was reading a press release for Disneyland East.

"...the projection of an old tenement projected on the new building that the Hotel Indigo replaced" - yeah, way to ingratiate yourselves with the locals. "Hey! Remember that small old building that used to be here, y'know, the one where people actually used to live, the one that allowed air and light into your environment? Well, here it is again, folks! Whoops, there it goes - now you see it, now you don't, I guess! There, wasn't that a nice one-of-a-kind, community experience like never before?"

Still not sure how anyone is supposed to "explore and discover the local neighborhood (of) Hotel Indigo...hosting an event exposing the culture of the Lower East Side" when it's corporate entities like this overpriced zit that take over and destroy local neighborhoods and the culture they contain, replacing it with soulless cookie-cutter bullshit, outdoor pools and VIP Table Packages. (Oh, and I can guarantee you that not a single tool that takes advantage of any of those packages will be a VIP anywhere except in their tiny minds.)

That must be the worst press release ever written. It sounds like something 1960's era Disney Land would have written to get children excited about a new themed section of that amusement park. The language is ponderous, sentences are poorly constructed and my favorite part (to laugh at) is " the color Indigo is the emblematic of each unfolding adventure".

As for the Bowery Mission, how not cool is it to brag about doing something (helping our poorest) in a press release. If they want all of this negative attention to disappear they need to scrap the "Mr Purple" concept and not speak of it ever again. Somebody in the corporate office fucked up big on this one so change the restaurant's name, paint out "Mr. Purple" from the lobby mural and start with the mea culpa.

To clarify 9:33, the Bowery Mission didn't issue any press releases about this. I asked them if they had a relationship with Mr. Purple, as the Gerber Group stated.

The response from James Winans in the post was via an email.

Marie Antoinette and her circle dressing up like peasants.

Save the light show for Time Square. Very tacky.

So tacky. And that marketing statement is hilariously pretentious and bad; a group of people actually wrote, edited, and approved that crap. "Neighborhood elements"?

I had been following Boweryboogie and would like to say that this one finally hits home with people. So many twisted concepts have gone unnoticed. Morus has been noted, but they tke donations from restaurants and bars that I find detrimental to our community. Get my drift.

I've noticed that the new normal for real estate companies like the Gerber Group and restaurants, when they are invading a neighborhood, is to post statements on their websites about how much they care about the cultural history of the neighborhood--how what they are doing is really part of the continuity of that history. BS!! The best one can expect from these voracious scum would be a statement saying that they will do as little harm as possible. That they will adhere to laws about noise pollution and sanitation and that they will make a good faith effort to see to see to it that they respect their neighbors by having appropriate security to maintain order. Save us from this pretentious hype (just as I want to be saved from wait staff telling me where the tomatoes in my salad were grown and what the ph level of the soil was).

What adventure awaits us when the the color Cerulean unfolds? Please, please, pleeeeeease do not leave us on the edges of our Eames furnishings of molded plywood and leather, Gerber Group!

This may not be a popular opinion, but the fact that Adam Purple is being honored by an upper-class establishment demonstrates that nothing he did in his lifetime was a threat to the ruling class. You don't see ruling-class tributes to Emma Goldman, and they've had a century to do that.

I can't help but think of baby food when I see Gerber. Banana was my favorite!

Can these People go FUCK THEMSELVES?

This place is so hilarious. Whoever runs their marketing has no idea what the hell they are doing. LMFAO it's so laughably awful! Hahahahahahaha!

Let's get this straight. Mr. Wilkie's greatest attribute was his hard work. It was the relentless work he put into his daily life and his beliefs.
There is nothing the hotel developers offer people who work. How could they? These are people that inherit wealth - not earn it. The David Wilkie's of the world don't have much use for Hotel Indigo

VIP Package #3 comes to $200/person, if you get 15 people to go, which shouldn't be hard for people with friends. That's a very good price.

There Must Be An Estate Lawyer In The Audience ... said...

I don't guess that Mr. Purple has heirs who might want to reject the uncompensated use of his name for commercial purposes, huh?

So wrong!! nyway you look at it. This just shows how insensitive and ignorant they are to Mr.Purple and the neighborhood's history. You can't buy respect, legacy or history.

@11:58 right on their website. Wayland, ABC Beer, etc. Residents on Avenue C are devastated by the nightlife there. One long time resident installed soundproof windows on her apartment and others are on the verge of leaving.