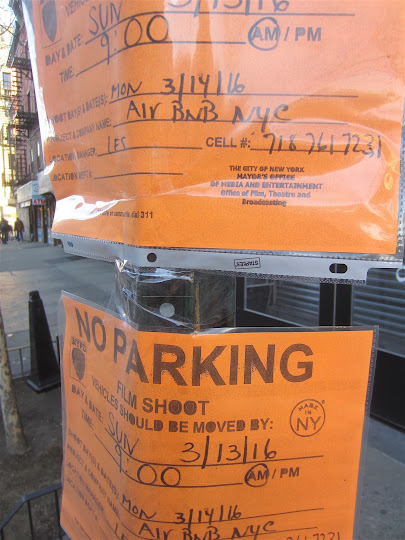 A crew filming a commercial for Airbnb was out early this morning on Avenue A... an EVG reader spotted them inside the Pyramid between East Sixth Street and East Seventh Street.

It all went well, except that the crew showed up drunk at 4 a.m. and couldn't find the front-door key, so they hit every buzzer in the building...

On the topic of Airbnb... BloombergBusiness published a piece today titled Airbnb to Let Neighbors Give Feedback on Hosts, `Party Houses.'

The company announced in Japan that they will soon "give people renting out rooms and homes through its website a better way to find out how the strangers showing up at their properties are behaving."

The feature, set to debut next month, will let neighbors enter comments in an online form. Feedback will be reviewed by Airbnb’s customer-support team, who will then take action as necessary. Airbnb didn’t say whether the information will be made public or if the identities of neighbors will be disclosed.

Airbnb’s rapidly growing service has sometimes pitted neighbor against neighbor and landlord against tenant. Cities have puzzled over how to regulate the startup, which was last valued at $25.5 billion. New York City has scrutinized Airbnb and taken steps to push back against commercial renters. San Francisco, Airbnb’s hometown, voted down a divisive ballot initiative that would have restricted home sharing in the city. Airbnb neighbors the world over have complained of “party houses” that attract rowdy renters ...

Get these people out of here! We have such a shortage of apartments, we don't need people hoarding them for a business.

It's not just AirB&B-ers, seems like its a generational thing.

I'm (temporarily) living in Astoria in a building otherwise mostly full of 20-somethings right out of college who have been told Astoria is the next Williamsburg. They and all their friends just hit whichever buzzer is easiest and expect to be let in. I actually just taped over the buzzer speaker in the apartment because I was tired of being woken at 3 or 4am by incessant buzzing by friends / visitors of some other random apartment in the building.

Maybe in dorms / college housing you just buzz randomly and get let in?

How is this reporting going to work in Japan? In order to complain to airbnb don't you have to know which apartments are being rented through airbnb? But they don't disclose that information. From renting a few air mattresses in apartments, to 25 billion. Amazing.

This is really related to this story but I have to mention that the dying/dead ficus tree in Empire Biscuits window has been moved away from street window. Maybe the owners read EVGireve after all.

This 20-something generation is very evil, they just have no consideration for anyone. They think they can act like the east village is still a bombed out shell and not basically the upper east side. They get VERY VERY upset when they get called out. These 20nothings respect nothing unless they are instructed to do so by their cell phone. I think if kendall jenner told everyone on facebook told these people to gouge out their own eyes they would.

They can kiss my tukuss - i want them out of business - who cares about their "gestures". noting but con artist.

Air B&B should join forces with Uber and create a whole city that is tailored to them & what they want. Then maybe all the 20-something morons would move there - esp. if someone says "it's the next Williamsburg" - and leave the rest of us in peace.

PS: I don't know why NYC would grant Air B&B a film permit for this "commercial", given how much Air B&B disses and dismisses NYC authority. It seems to me it's kind of like filming a pro-KKK commercial in a primarily black town in the South. WHY would NYC give Air B&B a film permit to ENCOURAGE behavior that the city has already said is largely illegal & unacceptable? I don't get it.

NYC should just ban AirBnB completely from the city.
The company is a cancer.