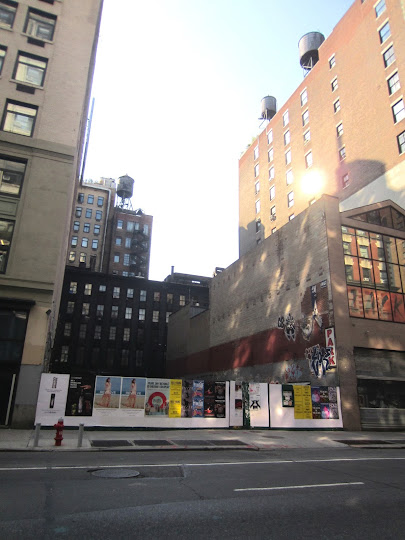 As previously noted, renderings for the 12-stories of condos rising at the former open-air shops on Broadway near East Fourth Street have made the rounds in recent years.

The Post had more details in an article yesterday titled "What it’s like to live on one of NYC’s secret streets." (H/T Curbed!)

The 16-unit project is known as One Great Jones Alley, which will include a "private gated alley." 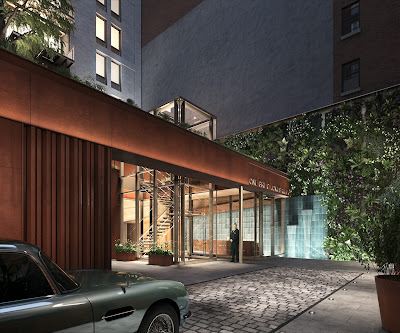 There's also a teaser site with a few more details and renderings... such as the master bathrooms... 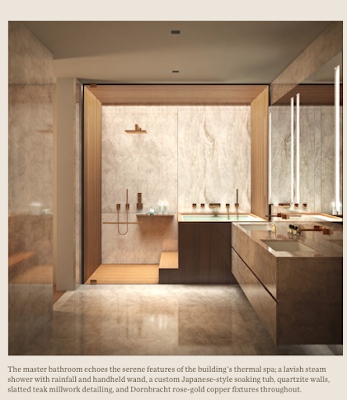 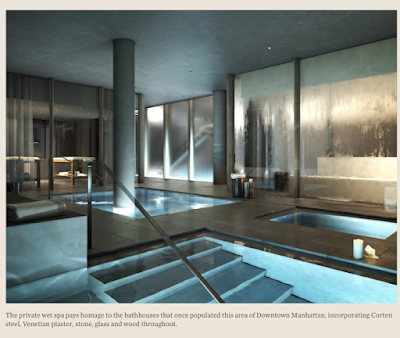 According to the One Great Jones Alley website, "the private wet spa pays homage to the bathhouses that once populated this area of Downtown Manhattan, incorporating Corten steel, Venetian plaster, stone, glass and wood throughout."

Renderings via One Great Jones Alley
Posted by Grieve at 4:20 AM

"pays homage to the bathhouses that once populated this area of Downtown Manhattan"
Are they referring to the bathhouses opened so the immigrants living in tenements without running water (never mind a toilet and bathtub) could clean themselves once per week?

Sidetone when did "Downtown Manhattan" with an upper case "D" become a real name?

Yes that is what they mean about the bathhouses - tone deaf never stops getting worse and so out of touch it is COMICAL..almost

I can see someone cracking their skull open slipping in that third pic.

""pays homage to the bathhouses that once populated this area of Downtown Manhattan"??

"...and a bucket instead of actual plumbing pays homage to the (lack of) toilet facilities that once populated [sic] this area of Downtown [sic] Manhattan"

Also, used heroin needles will be covered with gold leaf and tastefully scattered about the lobby floor.
- East Villager

so glad I got to live here before the city slid into expensive, uniform oblivion

Only 22 million dollars. No biggie. I'll just write a check.

NYC is should be changed to NMC= New Millionaire City.

@5:29: Do B list actors have 22 mil to spare on a pied a terre? Do retired rich couples want to call the EV home? Can you ever take the grit out of the East Village? And why would you want to? What is the appeal of the East Village without it? We are not quaint, charming, scenic, or beautiful. There' not a lot of architecture here worth preserving. We are not the Gothic Quarter of Barcelona, or even the West Village. We have always been a center of boundless eccentricity and energy. If no one knew your name, that felt like freedom. What will become of the East Village? The East Village is dead, long live the East Village.

"There'[s] not a lot of architecture here worth preserving"

Really? Brick tenements with street facing fire escapes are probably the most iconic NYC building archetype out there.

I don't think a B-Lister could afford a 22M pied-a-terre, but he/she could certainly afford the 4.62M apartment being offered if he/she has made enough money and is good enough to get more work. If an A-Lister makes 15-20M a film, I figure a B-Lister makes low end 5M to high end 15M. If you've made ten films and have been a B-Lister for the last five of them and you land 10M for your eleventh film, that's 5M after taxes you can use to pay for the apartment in full. Now you own an apartment in the middle of lower Manhattan paid in full for life and you could probably resell it for at least the price.