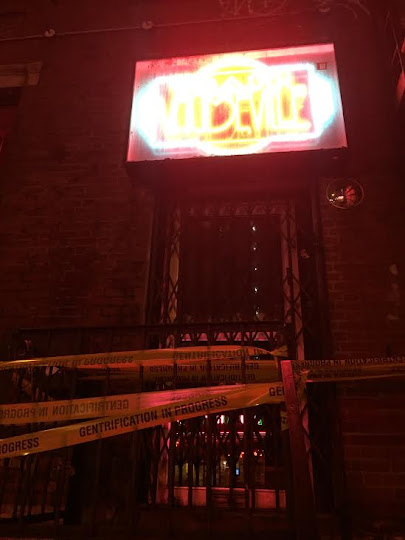 ... and the Stage Restaurant on Second Avenue... 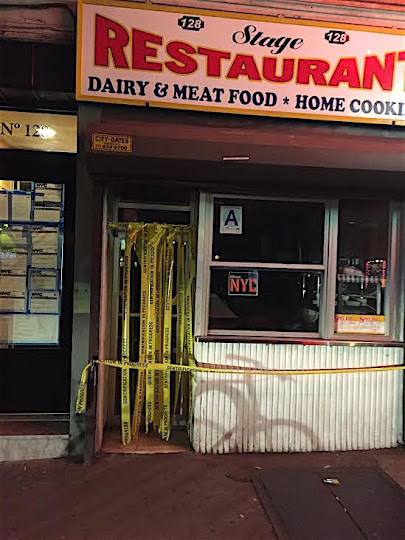 Thanks to EVG correspondent Steven for the photos (and H/T Ed B.)

Trash and Vaudeville closed after business on Sunday ahead of a move to 96 E. Seventh St. Rising rents and a change in the business environment on this block of St. Mark's Place between Second Avenue and Third Avenue were among the reasons for the move. The Stage announced its permanent closure earlier on Wednesday.

The tape is the work of the artist GILF, who previously has cordoned off the Germania Bank Building at 190 Bowery with her creation. 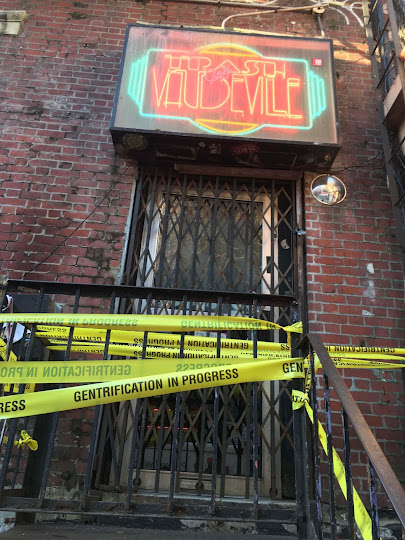 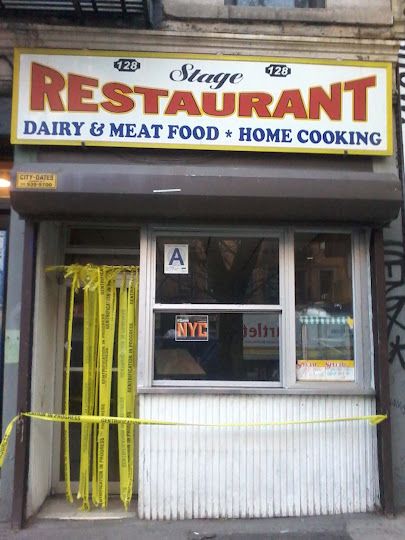 wrong about the former St Marks bookstore, that was a suicide.

Thank goodness someone has the money and the wherewithal to spend it on such redeeming efforts!

now that's an event -
every tenant in one of the newly purchased buildings should chip in and buy a roll of tape and decorate their buildings, and make sure it is maintained.
what a message that would be.
sounds like something the press could get behind.
imagine if this were on every icon building.
why limit it to icon?
stickers, police tape, banners.

the funny thing to me is calling any of this gentrification . i assume the person putting up the tape has lived in the area less then 5 years. was born after the tompkins riot . has a college education , not a minority. perhaps i am wrong. who knows. i have lived here since 1979 seen the big change. the "gentrification" you speak of happened a long long time ago. you, me living down here is proof of that. i think it was newsweek that had a cover story in 1969 called "trouble in hippieland" that talks about the gentrification of the east village. you guy missed that train a long long time ago.

NYC in 1967 could hardly be described as "gentrified"
Not only did we not miss the train, it hadn't even left the station at that point.

The tape is a nice gesture, but I think it is a little late.

Another good phrase for tape could be :

Art that is subversive, and might get a person to consider even for a moment what's going on around here. Well done.

@10:04 - so, what's your point? What is happening now is to be dismissed because something similar happened 50 years ago? People are suffering, lives are being destroyed, culture is being erased - how is this not gentrification? Look around and tell us what we should be calling this phenomenon.

Anon 11:34 thanks for the link to the article
Lol when I read the building described as "slum tenement" in 1967 and think of all those buildings that are still standing today. And btw I wonder how many of those 8 homicides reported in 1967 were ever solved or are cold cases? The stats on how many murders are actually solved by the police is abysmally low but maybe now there is hope when police time is no longer taken up by following the broken window strategy.

Anonymous Anonymous said...
@10:04 - so, what's your point? What is happening now is to be dismissed because something similar happened 50 years ago? People are suffering, lives are being destroyed, culture is being erased - how is this not gentrification? Look around and tell us what we should be calling this phenomenon.

Yes. that is what i am saying. my point is that the area became what it is a long ,long time ago. you missed it.it is over. all that cool shit you speak of is over.

You guys are all wrong, gentrification began in 1626 when Peter Minuit arrived on Manhattan Island and started building condos.