Selling off the former Nevada Smiths 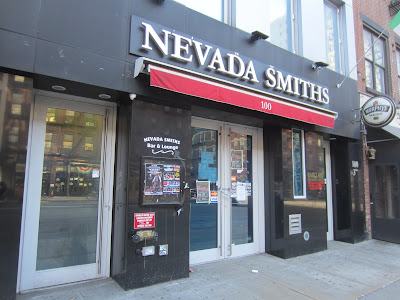 Nevada Smiths has been closed since the Marshal seized the three-level soccer bar at 100 Third Ave. last September.

Signs arrived early last week about a sale. The (presumably) new proprietors are unloading some of the unwanted items, such as TVs, bar stools and ... poker tables(?!)... 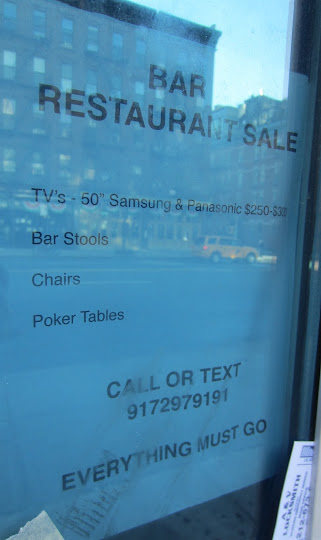 As for those new proprietors, Bruce Caulfield, a former Nevada Smiths partner and veteran NYC bar and business owner, along with James Morrissey (The Late Late on East Houston) and Gerard McNamee (GM of Webster Hall) have plans to open a venture called Vinyl, which will be a coffee house, vintage vinyl record store paying homage to Thin Lizzy and bar/restaurant all under one roof... We wrote about it here. (And Morrissey and McNamee are also behind the on-hold-for-now Honey Fitz on St. Mark's Place.)

Last month, the group appeared before CB3, who approved the Vinyl application.

So look forward to some updates on that incoming cafe-Thin-Lizzy-themed-record-store-bar-restaurant opening here between East 12th Street and East 13th Street one of these days.

Meantime, Grahame Curtis, who used to run the football (soccer) program at Nevada Smiths, is now doing the same at The Sports Bar around the corner on East 11th Street in part of the Webster Hall space...

All football, all the time! Today's big game is #eveche in the FA Cup but we've all the action from Europe & the USA pic.twitter.com/58pRlWlhWH

New concept for Nevada Smiths includes record store paying homage to Thin Lizzy, plus a bar
Posted by Grieve at 4:08 AM

Speaking of Nevada Smith's, around 26 seconds in: