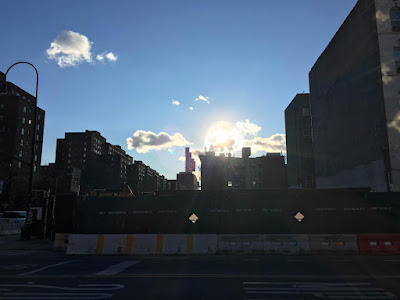 In a July 2014 post about the incoming retail-residential complex along East 14th Street between Avenue A and Avenue B, an EVG commenter left the following:

I live directly behind demolition on 13th street. The other day I was approached by a pollster for fairway market asking me a bevy of questions about my thoughts on a new fairway on the corner of 14th and Ave A.


And we heard this rumor from another source as well: That Fairway was looking into opening a market in the East Village. (And didn't someone float the idea of a Fairway for the Stuy Town Associated space?)

In any event, it appears Fairway won't be expanding anywhere anytime soon (like they did in Kips Bay a few years back). Grub Street published an article yesterday titled "Inside the Collapse of Fairway, New York’s Favorite, Failing Grocery Store."

To some key excerpts:

The company is saddled with $267 million in debt and on the brink of bankruptcy, and its stock price, which once peaked at $28 per share, is selling for roughly 30 cents. The collapse has been swift and brutal. "Lives have been totally changed and ruined," says one former buyer for the chain. "What happened was an injustice."

[A]lmost everyone agrees that a confluence of issues — including an overly aggressive and poorly executed expansion plan and rising competition in the quality-produce business — are the reasons Fairway is now in crisis. "It was a perfect storm," says a former executive for the company.

NO SURPRISE. One size fits all never meshes with expansion plans!!!!

Stirling Investment Partners ruined this business. They are the ones who took out the 267 million in debt, largely to pay themselves a huge dividend and make their exit profitable, while IPOing the company and turning shareholders into bagholders. Thanks, Private Equity. You certainly make the world a worse place.

8:02 and 9:03 -- definitely the case here, sorry to say; those who live behind tall stone walls (in central CT)may be able to raise money to fund expansions-- and do they really hire the wisest people to do the actual due diligence legwork about expansions? Once the IPO flag is raised, it must be seen for what it is: a pirate flag.

What a shame. Fairway was a great business for decades, then they made a deal with the devil to get rich, overexpanded, and are almost bankrupt. Their Kips Bay store has been going downhill for the past year but is still a nice option. The selection in the cheese section is getting more and more sparse, they don't do the olive oil tastings anymore, and the produce tends to be overpriced. Zabar's was much smarter by staying focused on their main store.

I guess this is good news for the 14th St Associated, StuyTown's new corporate overlords will be anxious to sign a lease renewal now.

This is a Mitt Romney/Bain Capital style bust out. This is the problem with vulture capitalism, the employees and loyal customers are left with nothing, the bankers walk away rich. You can plan on seeing a lot more of this if Donald Trump gets elected, and if it's Bloomberg in the White House it will be even worse. Just look at what has happened since Bloomberg rezoned huge parts of Manhattan and set up huge tax breaks for luxury development. So much for getting rich quick, sometimes you just get poor fast.

It does sound like they got BAINED. Never put your store in the hands of the money men. They are not there to help make it thrive for you. They are there to turn it into capital for themselves. Every damn time. You're basically dealing with junkies who are going to pawn everything you own and then disappear.