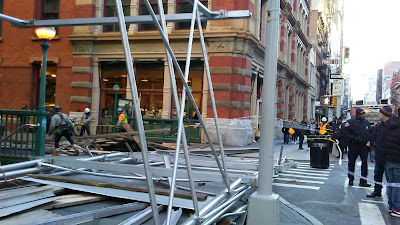 Stepping away from the usual coverage zone for this post... EVG regular Lola Sāenz shared these photos this afternoon... showing the aftermath of the scaffolding collapse on Broadway and Prince... 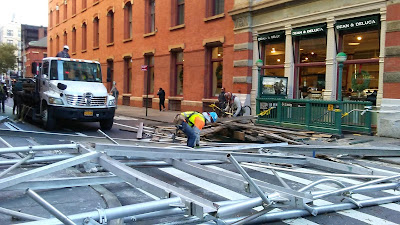 According to reports, five people received minor injuries after the sidewalk bridge on this corner collapsed this morning around 11:30 a.m. The FDNY blamed today's high winds for the damage.

Twitter is full of clips of passersby digging through the planks to help those injured...

There were also reports of a collapsed sidewalk bridge at 753 E. Sixth St. at Avenue D. Per CBS 2, there weren't any reports of injuries. 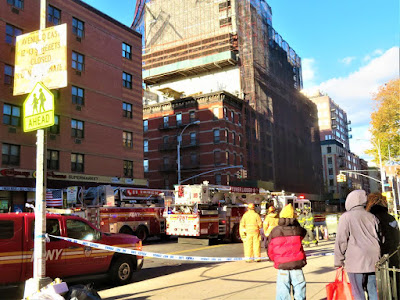 A bystander said that a piece of the scaffolding came down at 79-89 Avenue D between Seventh Street and Sixth Street ... where a 12-story retail-residential building is under construction. 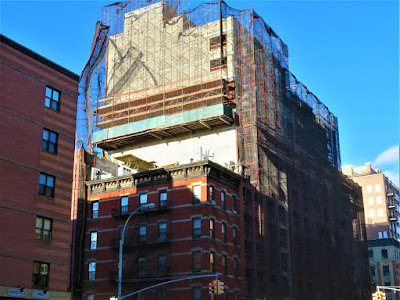 According to the DOB website: "FDNY REQUESTS A STRUCTURAL STABILITY INSPECTION DUE TO SCAFFOLDING IN DANGER OF COLLAPSE."

FUUUUUCK. 1. amazing more people weren't hurt -- whew. 2. look how quick people are to get in there and help.

There was also a partial scaffolding collapse on East 6 St. off Avenue D.

I'm surprised the FDNY jumped to immediately exculpate the scaffolding company and the landlord. I walk by this corner every day. The scaffolding is extremely shoddy, and the support beams are precarious. Flimsy plyboard has looked on the cusp of crashing down for weeks. It was also put up with a flagrant disregard for anyone in the neighborhood, as the support beams are a few feet indented from the curb, creating a chokepoint that clogs the sidewalks on a regular basis. I've also seen zero actual construction work on the building - probably another case of putting up scaffolding indefinitely instead of doing mandated repairs. I really hope the city council passes the proposed scaffolding legislation.

According ngnt CBS news,’he scaffolding has been up for almost a year, and people who work nearby say it has been moving and shaking whenever the wind blows. Why the DOB lets these deathtraps stay up for so long without inspections is no mystery: time and money. Up on 96th and Broadway I once saw three workers fall straight though the corrugated metal sheets. which were so rusted out after being used for way too long. They fell 20 feet to the pavement. All of them were knocked out and had broken bones. There was blood everywhere. Luckily they didn’t land on any of the nine million baby strollers that crowd those UWS sidewalks every single day. But no one cares about these scaffold workers, since they are almost all from Mexico and Latin America. They walk around on those beams with no safety equipment other than their hard hats while pedestrians walk below, unaware of how dangerous these scaffolds can be.

It's still true that once a person or two starts to help, others will usually follow.

Does anyone have additional information on what happened at Avenue D and 6th St.? It was more than fallen scaffolding. Both Avenue D and 6th St. were closed for hours. The M14 was running down 7th St. Con Ed emergency crews were on the scene working both underground and in backyards adjacent to the huge construction site on D in an immense area surrounding what was a "scaffolding" accident? The construction crew (which regularly violate the hours mandated by the DOB) were working well into the dark night. In addition to commandeering multiple lanes of Avenue D for their construction, this crew has had numerous site "accidents"- chopping down trees in neighboring yards, cutting multiple building Verizon connections resulting in no service for endless weeks. There's no information anywhere of what went down here yesterday...

@8:35Am The scaffolding incident on 6th and D was different than the one on Broadway because it involved a much larger metal scaffolding that covered the entire building. Its the kind of scaffold that covers the entire building and is used for more extensive facade work. When the wind blew it ripped the entire metal scaffold frame backwards and it was bent, leaning back over the street/ If it fell it could have killed people and damaged other structures, so they had to dismantle it carefully which took hours.

Per the DOB website, a full stop work order was served on the Avenue D construction project. Construction was going on this morning- wassup with that?

I am terrified to walk under those things!
So great to see how everyone runs over to help immediately.