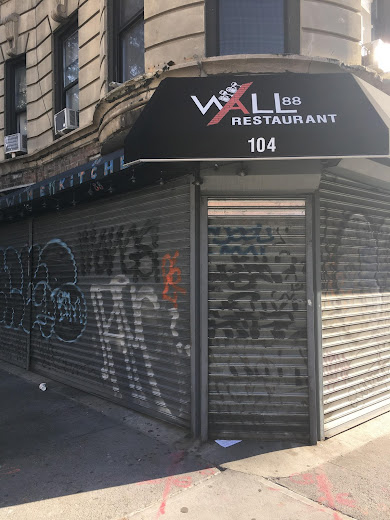 Multiple readers have pointed out that Wall 88 has not been open lately, including this past weekend here on Sixth Street and Second Avenue.

The Wall 88 phone kicks into a full voicemail box. There isn't any mention of a closure on its website and social media properties. (Yelp states Wall 88 is permanently closed.)

However, despite the fact that the gates have been down for a week, the Wall 88 Facebook page is still robo-posting stock photos and sentiments ...

The restaurant serving rather pedestrian pub fare opened back in March. There was a quick turnaround here after Lions BeerStore closed.

Lions BeerStore — part retail shop, part restaurant — opened in November 2015. An EVG reader said that the Lions BeerStore owners are partners in the new venture, though someone else is/was involved in the day-to-day operations.

If all their robo-posts can do is push overindulgence in alcohol, then good riddance to them.

I ate there several times and liked it a lot. It was a quiet place for mussels, burgers, etc. where I could eat alone comfortably or bring beer-loving friends and have conversations without having to scream over the music or a drunken crowd.

What did well on this corner was Bamboo House Chinese Restaurant who opened i 1978 and closed 30 years later when the rents got too high.

Lionsbeer Store was my hangout in the neighborhood. Wall 88 just wasn’t ever the same. Both will be missed by me.

I blame their stupid sign that no one could read.

That beer glass selfie reminds me that here, a pint glass is a 'pint' when it is filled to the rim. Those two glasses are filled to about 80% of a pint, but are sold as a 'pint'.

In the UK, glasses have a mark line on them, to which they have to be filled with liquid (not foam), to be full measure.

I loved Lion's Beerstore. I wish it would reopen every single day.

What I really miss is Bamboo House.