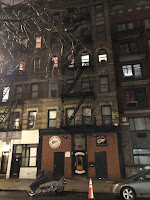 The Post reports that a deliveryman was punched early Monday when he parked his car in front of motorcycles outside the Hells Angels clubhouse on Third Street between First Avenue and Second Avenue.

A stranger in his 60s approached the driver and told him he couldn’t park in front of the hogs, but the deliveryman continued with the drop-off, law enforcement sources said.

When he returned to his car, two other men approached. One held him by the neck while the other sucker-punched him in the face, the sources added.

The victim, who reportedly suffered minor facial injuries, refused medical treatment. No arrests were made, per the Daily News.

Both the Post and the News noted that in December 2016, a Long Island man survived a gunshot to the stomach during a late night/early morning altercation outside the clubhouse. Police said that the fight began after the victim exited his friend's Mercedez-Benz to move an orange parking cone so that the car could pass a livery driver stopped on the street.

The biker charged in the assault reportedly died of an aneurysm in September 2017.
Posted by Grieve at 10:09 AM

The delivery guy is a moron and should have moved his car The HA have been on 3rd St. longer than mostly everyone now living in the neighborhood and only a dumbass would not move their car when advised to by the club. He disrespected them and got off pretty easy compared to the last guy who did the same thing. Also EV you left out the Ron Kuby quotes about the Big Red Machine 3rd street guys. We love Kuby and his quotes about the Club.

The Hells Angel club should leave the neighborhood. Good riddance.

Whoever made the anonymous comment above should sign it like any old skool neighborhood resident would. Perhaps you should move out because the HA presence outdates you by years and years and FYI their building is worth big bucks now and if they sold it the space would be filled with boring condos for NYU students or Mufffy and Buffy lameasses like any anonymous commenter who tells long time residents to leave the neighborhood and is too cowardly to sign their comment Also, don't put up a comment that says you are a longtime resident unliss you sign it because how do we know if you are lying or not.

With all due respect John Penley, you do the same exact thing every single time the HA act stupidly: yammer SIGN YOUR NAME SIGN IT SIGN YOUR NAME like a broken record. You encourage and condone the HA's violent, bullying behavior, so it can be assumed that you'd extend that endorsement to offline harassment.

This delivery kid who got punched is 22. Going by the hardworking delivery people biking all over the neighborhood every day, there's a good chance this kid was Mexican or Asian or another person of color from a working-class and maybe immigrant family. Don't you think he's already got enough going on in his life, working at 2 a.m. to make an honest living—and yet you expect him to know about the bizarre parking-space bylaws of this last-century motorcycle club, about the orange cones they treat like pwecious figurines? Altamont happened twenty-seven years before this kid was even born!

Penley I want to remind you that assault by punching is against the law of our land, and also that punching a guy while your buddy holds him by the neck is totally bush league.

The antisocial and illegal behavior that the Hells Angels are allowed to get away with year after year eeeks of white privilege. If that was a Black Lives Matter clubhouse, the cops would have arrested anyone who tried to illegally take over public street space for their own use, And the idea that some delivery guy should “respect” their illegal claim to public space, while they show no respect for anyone else, is another laughable example of white privilege. They age-old “myth” that they somehow keep this block safe has been used to excuse their violent acts forever, but don’t worry, gentrification will one day catch up to them too. Someone will get greedy and want to sell the building. In the meantime, they should show the neighborhood the same respect that they demand from everybody else.

The street is public property, and not owned by HAs. Anyone has a right to park there.

Lifelong resident here: Hells Angels have always been bullies in the neighborhood. I can remember when they were more ominous. Holding some guy down while somebody else punches him, is bullying by definition.