The former Grassroots Tavern ready for a renovation 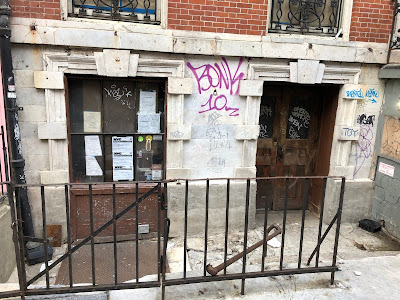 While on the topic of landmarked buildings on St. Mark's Place between Second Avenue and Third Avenue... approved permits are now on file for repair work in the retail space at 20 St. Mark's Place, the longtime home of the Grassroots Tavern until New Year's Eve 2017.

The city OK'd the permits just after the New Year. Per the DOB's ALL-CAP style: REPLACE 8 EXISTING DAMAGE WOOD JOISTS WITH STEEL I BEAM W10X33. REPAIR FLOOR AND CEILING AT BASEMENT AND 1ST FLOOR. STRUCTURAL WORK AS PER PLAN.

Applicants for Ichibantei were on the November CB3-SLA agenda for a liquor license for a new restaurant in the former Sounds space upstairs. However, they withdrew the application before the meeting.

Jim Stratton, the longtime principal owner of the Grassroots, the tenant here for 42 years, decided to sell the business in 2017. In January 2016, Stratton sold the building to Klosed Properties for a reported $5.6 million.

20 St. Mark's Place, known as the Daniel LeRoy House, was built in 1832. It received landmark status in 1971, and added to the National Register of Historic Places in 1982. Since the Grassroots closed, someone has tagged the bar entrance multiple times.

Ichibantei vying for 20 St. Mark's Place, and an update on the former Grassroots Tavern space
Posted by Grieve at 4:19 AM

Part of the lure of Grassroots was that the ceiling might collapse any minute.