[Updated] After 43 years in business, Raul Candy Store is closing on Avenue B 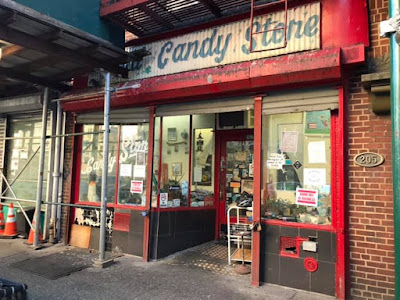 "Going out of business" signs now hang in the front window at Rauls Candy Store, bringing an end to the one-of-a-kind shop's nearly 43 years in the neighborhood.

EVG reader Jenny Dembrow shared the photo here from yesterday. Raul closes at the end of the month. No word at the moment why the candy shop/neighborhood hangout/junk shop is closing. (See below for update.)

Here's more from the Q&A:

Q. You manage all that selling candy?

A. We sell “chucherias” (knick-knacks), candy and sodas. Raul also sells books and other stuff. There’s not that many of these type of stores around anymore.

Q. Are you both from Puerto Rico?

A. 100 percent. I was born in Las Marias and grew up in Mayagüez. Raul is from… I can’t remember where he’s from. Humacao, maybe. I met him here. He used to go to the island every year. I don’t.

Q. Is it mostly Puerto Ricans who buy things here?

A. We get people from all classes, no matter the race or color. Some come in to look and take pictures. Others come to hang out. It’s like in Puerto Rico, where there are “kioskos,” small businesses where neighborhood people get together. We play dominos out here and we have a good time between people of the old guard.

Stacie Joy stopped by the shop today. Raul says he's "tired and needs to rest." She asked what if anything the community could do and he said nothing. He just wants to stop. He says it's time. 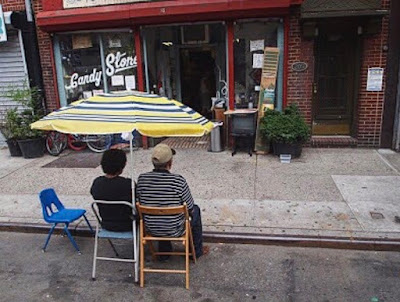 No, no, no! Wake me up and tell me this is a nightmare, please.

I live around the corner of Raul Candy Store for nearly as long as it has been open. I can't imagine that strip of Ave B without it. I've always loved the social element of it although I never ventured inside it was one of many places of its kind back in the day.
43 years is an incredible run and unlike anything we will see again in this city again.

disappearing new york :(
what national chain will take their place....
great job with your site. i enjoy following you

Never again will a place like this exist organically; not in our corporate, whitewash world. Places that are stuck in time, where there is comfort in the familiar. Where there is community and history, and charm that can only be earned through years and years of use and abuse. Places where the picture frames have been stuck on the wall for so long that they have left their silhouette. Where there is more purpose and meaning than just selling candy and newspapers...

How many mom and pop stores close before the public demand their lawmakers to stop taking real estate money and pass a law now to give rights to small business owners when their leases expire. Without rights every business has no future in NYC even chains will close.
Vote new people in at next election.

Let clear the air Raul is not being put out is just that time to say goodbye to the neighborhood an enjoy his & his wife life together with his family. Is definitely sad shit brings a lot of childhood memories.

Thank you Raul for being family! Bendiciones

The old NY is gone.

I grew up around the corner of that store as a child I remember buying the penny candys and how happy I was to walk out that store with a bag of candy its really sad to see this wonderful memory just go away for me and all the other people that remembers the same..Good bye my dear store and thanks for giving us wonderful memories ��

that's a historic place;going back to the hippies era;and everything outside and inside is as authentic original

My Dad would hang out with all of the original old timers playing dominoes. It's so sad to have the flavor of the Lower East Side eradicated and replaced by these ugly hipster trap buildings. Adios y que disfruten su retiro!!!

I grew up in there, my father took me there after getting haircuts at Rauls. I wish i could talk to him and run it for him.

What a shame. Things never remain the same. :(

It has nothing to do with rent!! He and his wife want to retire.

Wishing them a long & healthy retirement to enjoy!

@neolani: You've lived around the corner for almost as long as they've been in business, yet you NEVER "ventured inside"? Wow...

My adult son took me there and,I was a kid in a CANDY store. You will be missed. Thank you for sweet memories.
Enjoy your retirement.

Bodegas are a disappearing facet of our cultural legacy to NYC.

This ruined my day. Where else can I buy my favorite tootsie roll flavors. On a student salary a penny each.. I should sue them for emotional distress. R.I.P - papi chili- young abu dhabi.

so sad to see it go :(
all of nyc is not the same anymore higher rises higher rents
im proud of raul and family for keeping it this long best of wishes raul and and family do enjoy your retirement it was well serviced the lower east side community for 4decades will be missed walking by and seeing this iconic neighbor store close grew up eating penny candies and limbes de coco was a treat in the summer/year round god bless..

sad to see this iconic lower east candy shop close
higher rises higher rents
but it stood strong for over 4decades
i remember as a kid going in to buy penny candies and limbe de coco that was popular in the summer but sold year round and their dulce de coco bread
raul will know all our faces growing up
sorry to see this go
happy retirement raul this neighborhood candy shop will be missed :(