[Updated] Evacuations on 10th Street as inspectors examine crack in the former P.S. 64 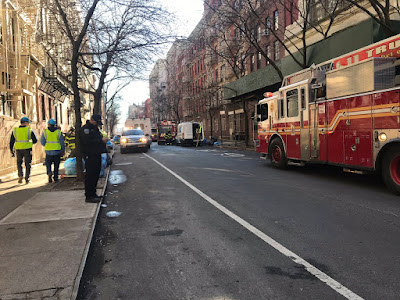 Crews from ConEd, the FDNY and the Office of Emergency Management are on the scene along 10th Street between Avenue B and Avenue C. (The street is closed to traffic for now.)

Workers are examining a large crack in the east-facing wall of the long-empty P.S. 64.

@_elkue has been tweeting from the scene...

Buildings Department inspecting the crack. That is one big ass crack. pic.twitter.com/Qardx5JV3A

No word just yet about how serious this might be. The building has fallen into disrepair in recent years.

One thing clear: owner has neglected to take care of this property. More updates soon!


Developer Gregg Singer bought the former P.S 64 and CHARAS/El Bohio community center property from the city during an auction in 1998.

Singer has wanted to turn the landmarked property into a dorm called University Square, which continues in a holding pattern while the DOB maintains a Stop Work Order on the building.

You can read this post for more background on the 20-plus-year P.S. 64 drama.

The city gave the all-clear earlier in the afternoon. Curbed has more here, including comments from Singer...

“It’s all political. This is part of a concerted effort to put pressure on us,” Singer told Curbed. “I was just at the building. There’s definitely cracks—that we were already aware of—that will be pointed and repaired, but there’s no immediate danger.”

After surveying the building, city inspectors determined that the building is safe but did issue a violation to Singer for failure to maintain the exterior facade for cracks observed on the corner of the building at the third floor, a DOB spokesman said.

“DOB Engineers on site have inspected the entire building, and have found that the building is not in imminent danger of collapse, and does not currently pose a danger to the public,” said DOB spokesperson Andrew Rudansky in a statement. The vacate orders at the evacuated buildings have been lifted.

This morning, the Department of Buildings issued a violation to the owner of the long-empty former P.S. 64, Gregg Singer, for failing to maintain the building's exterior after DOB engineers found cracks in the corner of the building on the third floor. In addition to evacuating the adjacent buildings, firefighters and Con Ed officials had to be called to the scene as well.

CHARAS/El Bohio, also known as the old P.S. 64, was auctioned off by Mayor Rudy Giuliani 20 years ago and has remained vacant ever since. Singer, the purchaser and current owner has not adequately maintained this landmark building, allowing it to deteriorate to its current condition. At a Council District 2 Town Hall in 2017, Mayor de Blasio announced that his administration would take steps to re-acquire this building. No substantive updates have been provided on this issue since then.

Evacuations are cleared and DOB has left.

Score this one to Singer, 20 years of rain, snow and neglect, a savage attack on the decorative Beaux-arts elements to prevent a deserving landmark designation and structural cracks are no apparent.

Shout out to Carlina Rivera's and Harvey Epstein's offices. Both were on the scene very quickly offering to assist displaced residents.

Can De Blaio get off his rump and have a nonprofit take this over? Jeez, if this were a real landlord -- instead of this fake "developer" -- the DoB would be all over him. That this neglect has persisted for nearly 20 years libels the city, now, as well.

Cant wait for a community group to bring a law suit again Singer as well as the city.

I hope Singer gets exactly the karma he deserves, and as soon as possible. He is a modern-day vandal to allow that beautiful building to sit empty and un-maintained.

It would be lovely if NYC made all necessary repairs and billed Singer for them. Or, even better, if NYC simply took ownership of the building as a distressed and essentially abandoned property.

The sad part of the crack for the community is that the building might have to be torn down.. If that's the case Singer can build what he wants. Anybody say luxury housing?

yeah that is what I am scared of exactly. Now he HAS to do something with it and it won't be good. Then they will clean up Tompkins park just like Wspakr and sanitize it with fancy food trucks.

This is what the developer wants for building to collapse so he can put up whatever he wants where landmarked building is. This building should be high school for the youth in the community which is the building’s original purpose.

Well, at least it's apparent to everyone everywhere nowadays what a craven hack Giuliani is and always was--the auctioning off of Charas as yet another example.

Time to get off the dime. This old school has been a derelict eyesore for too many decades. The school needs to be reclaimed by the city and turned over to NYC School Construction Authority. It is difficult and expensive to acquire the lot size for a school today especially in Manhattan this is here just reclaim it. When the school was shuttered in 1976 the neighborhood was depopulating not the case today. St Brigid Church was an eyesore almost demolished, it was restored and returns as a village gem. The same can happen here a 1903 French Renaissance Revival worth the restoration comes back as a school and architectural gem.