I Am a Rent-Controlled Tenant

East Village resident Susan Schiffman documents the apartments of rent-stabilized tenants — and for this post, rent-controlled — living in the East Village for her Instagram account, I Am a Rent Stabilized Tenant. She will share some of the photos here for this ongoing EVG feature. 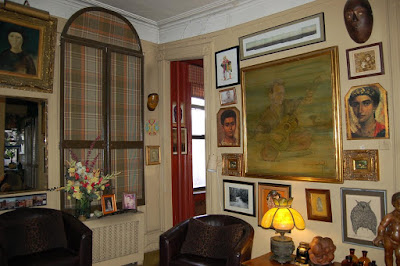 Why did you come to the East Village?

I came to the East Village because Charlie and I met. We started dating. We met in Ty’s, which is a gay bar that still exists, much to our amazement. It is on Christopher Street. Do you know the Moth? Charlie did a story on the Moth about the first night we met. It’s called “Just One Drink.”

Charlie said he didn’t want to date. His friends said “they’re not going to come to you, so you must go out to them.” Charlie said, “all right, I will go to a bar and I will have a drink.” And then we met.

I was living on Sullivan Street at the time. There are 13 years between us. I was younger and he was more mature. He had been in this apartment already for over a decade. We dated for about six months. I had a lot of stuff here and a lot of stuff there. My lease was coming due. We started talking about moving in together. I moved in. 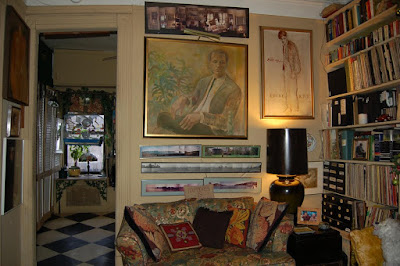 How did Charlie find the apartment?

He was living on the Upper West Side. He was a theater, artistic, 100-percent visual person. He had a dear, close friend who was female. They were young, it was the 1960s. They decided to get married. She knew he was gay. Unfortunately, marriage kind of killed their friendship. They decided it was a bad idea that they had gotten married and got a divorce. It was amicable.

A friend who lived across the street from this apartment told Charlie that the apartment was available. The previous tenant had lived here for over 50 years and had passed away. Charlie got the apartment. It was a mess. Nothing had been done for 50 years. The floors were bare and the walls were crummy. He was 27, a designer with an artist’s eye. He said, “I can fix this.”

There are things in this apartment that have been here since I arrived. With a little bit of work we could make that something. The dresser came out of somebody else’s apartment. He was young. He didn’t have any money. Whatever he found he found a way to use it. When he did have money, even actors make money occasionally, he would buy art.

He had a friend who didn’t know what to do with himself so Charlie said you should find something and focus on that and collect it and see what you can do. Charlie decided it was going to be owls. 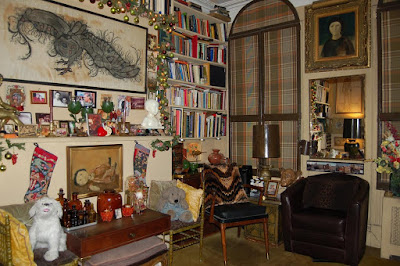 If you knew Charlie he doesn’t wait for you to say yes, he just starts doing it. He started finding owl things. His friend never did take up the owl project.

This one is a friend of ours, Steve and his wife on their trip to Norway. He did this one of the fjords in Norway. He was inspired by Charlie’s panorama technique.

That we bought on Second Avenue from a guy who had a table on the street. I grew up in the country. Charlie was born and bred in Brooklyn.

That is by Buffie Johnson. That’s actually Yul Brynner at the time he was making his Broadway debut with Mary Martin. Charlie found it in a thrift shop. He contacted Ms. Johnson at one point and she said “Oh is that what happened to that? I had some work being done in the house and it just kind of disappeared.”

That’s my spirit of the swamp.

The fabric thing is because the walls are terrible and Charlie was a designer. He designed clothing and costumes. He would, we would, we did these kitchen walls three times. Charlie would find a fabric that he liked. It was orange first, then brown then black. He would sew the panels together and then we would get up on the ladder with a staple gun and start laying it around the room. It’s smooth and then you can’t see the walls behind it, which are just a disaster. 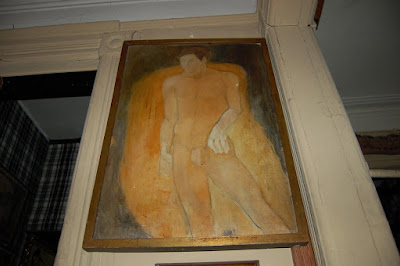 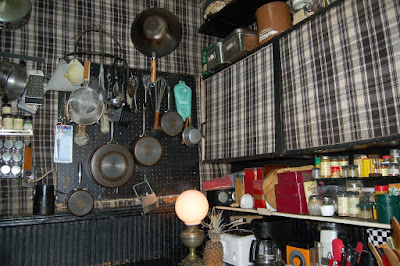 What do you love about the apartment?

What I love about this apartment is that it represents our life together. I have not changed the phone message since Charlie passed away in September. If you call you will hear “you have reached Terry and Charlie.” I’ll get to it. I’m not ready yet.

In this moment in time, this is our home. This is where we lived. I went back to college and got a new career. We did everything we needed to do to live a life together. This was our home base. This was Charlie’s sanctuary. Sometimes he had a little trouble with the world. He felt safe here. 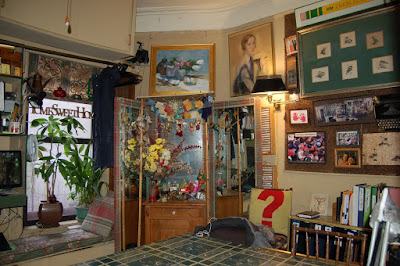 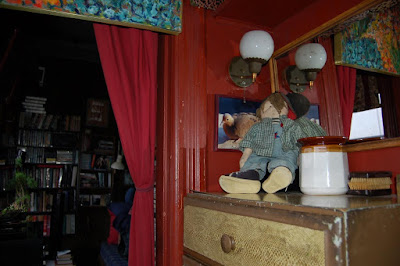 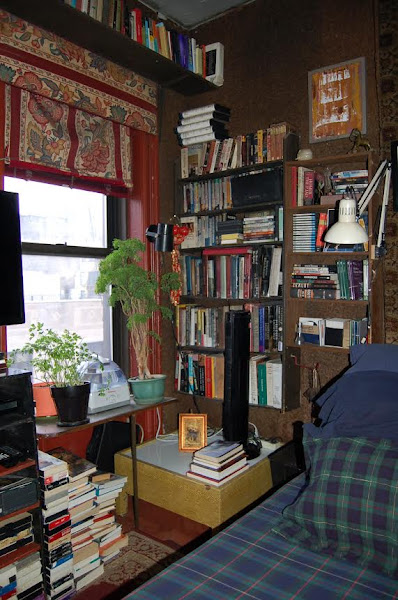 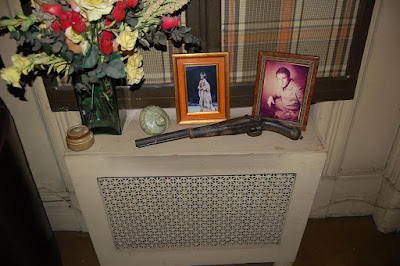 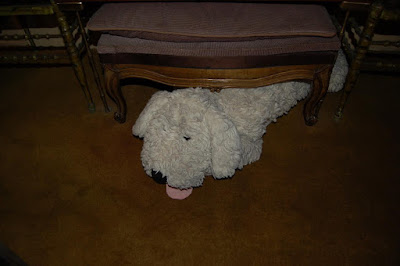 If you're interested in inviting Susan in to photograph your apartment for an upcoming post, then you may contact her via this email.
Posted by Grieve at 4:30 AM

Wow, fantastic apartment and I love how this devoted couple, Charlie and Terry, made it happen. Gorgeous use of color, fabrics, space, light and the art is distinctive. And yeah, Terry's dog is adorable! :)

Since rent control effectively ended I believe in August of 1968 (not to be confused with rent stabilized)I wonder how many apartments are left?

That telephone message story, it is hard to let go of those things.

What a fantastic EVG East Village love and life story. Thanks for sharing it and thanks to the reporter for writing it. Sounds like you both found your life soul mates which many of us never do.

this is incredible. what a beautiful place and what a wonderful, romantic story. "i was younger and more mature," ha ha. sending terry warm thoughts, so sorry for his loss but so inspired by the terrific life he and charlie made here. lifestyles of the TRULY rich, if not famous!

@Anon 10:13 AM - I believe there are currently around 20,000 Rent Controlled apartments left in NYC. To qualify, the tenant, or their lawful successor, must have lived in the unit since July of 1971. Contrary to popular myth, not all Rent Controlled tenants pay dirt-cheap rent. If the Landlord has done "major improvements" to the building, they can collect rent increases of 7.5% EVERY YEAR. This is totally separate from the Rent Stabilization rents negotiated yearly.

wow, that packed a punch. brava, susan. much love to terry.

i particularly love the vintage typewriter hung on the cork wall as art, and the snakeskin fronts applied to the wooden dresser. fabulous. i wondered which of the two gentlemen in the paintings was yul brynner. and i want to know what all the books are!

The watery looking painting between the two Egyptian mummy portraits and above the colored glass lamp shade is Yul Bryner (he's holding a guitar). The seated gentleman in the jacket and tie over the couch is Charlie around age 30 - and painted by the same artist who did the male nude and the woman's portrait over the mirror.

I absolutely adore you two and am so sorry for your loss. What a wonderful life you had together and what beauty was accomplished. It's a very loving home. Thank you for sharing it with us.

This series just gets better and better. Somone needs to turn them onto a podcast, with a slideshow. Nice work!