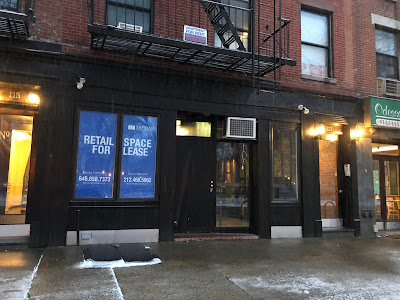 The operators behind St. Dymphna's announced on Instagram that they have signed the lease at 117 Avenue A, and plan for an opening late this spring or early summer.

As first reported here in December, applicants for St. Dymphna's were on the CB3-SLA agenda for a new liquor license for the space on A between Seventh Street and St. Mark's Place. (CB3 OK'd the license.)

Now the Irish-style pub, which closed on St. Mark's Place between Avenue A and First Avenue on Oct. 20 after 24 years in service, will have an encore presentation. The new team includes previous owner Eric Baker, Brendan McElroy, proprietor of Dr. Brendan Mac Repair on St. Mark's Place, and a "St. Dymphna's family member."

I asked Baker if they plan to replicate the St. Mark's Place space here.

"I would not say we are trying to replicate the original space into the new one at all. Our goal is to honor the original while letting the new space dictate to us what it should be," Baker said in an email. "Our goal is to recreate the community and cultural atmosphere, which is much more to important to us than architecture. We will be honoring the old space but this is much more of a reincarnation than replication."

No. 117 has remained empty since the bar the Black Rose closed in April 2017 after nearly two years in operation. No. 117 was the longtime home, until August 2013, of the Odessa Cafe & Bar.

Previously on EV Grieve:
St. Dymphna's eyeing a return engagement, this time at 117 Avenue A
Posted by Grieve at 4:28 AM

Excellent news! Hoping they bring their 20 oz pints with them to new location and keep the happy hour. Please, please please!

Great news all around. Win for Ave A, win for St. Dymphna's. Win for old Odessa "dark" bar. Win for Odessa diner, let's hope people discover it! And a win for saying "No" to douchebag bars like "Black Rose"

I'll wait to see his prices before I declare this a "win' for anybody.

Don't be cheap... much better than a dark store

I hope they know what it is like to deal with Croman.