As several readers have noted, there seems to be a rash of missing-lost pet flyers of late... Here is another. A little background. The person who sent along the email said that a friend moved to another country, and needed to find a new home for his cats. An East Village resident took in Rex, but later apparently abandoned him somewhere in the neighborhood.

There is a permanent home for Rex now once he is found. 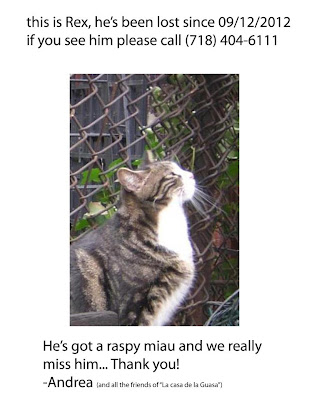 Poor kitty. Does anyone know approximately what block Rex was dumped?

She was thinking Tompkins Square Park.

This is terrible! I really hope 718 does not mean this kitten wandered from across the bridge all alone.

I am hugging and squeezing you, Rex

He was abandoned near 8th street and Avenue D. He is super sweet but probably very scared wherever he is found. He might be in a shelter close to that area.

Wouldn't it be fabulous to abandon all the fools???

Any chance this could be the cat stuck in the courtyard from an earlier post? Same pose, similar markings, seems sort of coincidental.

the kitty trapped in the courtyard is spotted...not striped like Rex :( Thanks for the thought though!

any update on this kitty? has ollie's place (cat rescue on 9th street) been notified? they might be able to help/keep an eye out?