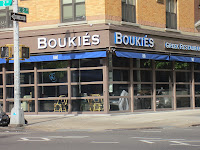 Christos Valtzoglou, the owner of Boukiés (try the Spanakotyropitakia!) on Second Avenue and East Second Street, is suing the State Liquor Authority over an "illegal agreement" with Community Board 3, DNAinfo reported today.

[T]he SLA's decision not to grant a full liquor license to Christos Valtzoglou’s East Village restaurant Boukiés was based on an agreement between Community Board 3 and Valtzoglou that the board did not have the authority to make.

It's a little complicated, and dates back to when Valtzoglou could only get approval for beer-wine for his well-received but short-lived Heartbreak Cafe at the same address.

Also from the article.

Susan Stetzer, District Manager of CB3, appeared at the meeting to voice opposition to Valtzoglou’s application, according to legal documents alleging the board was interested more in asserting its power than in acting in the community interest.

“CB3 was motivated more by its interest in keeping its authority intact rather than representing the interests of its community members,” according to the lawsuit.

Boukiés opened almost one year ago to this date. Stetzer said that she was unaware of the lawsuit and declined to comment to DNAinfo.

Read the whole article here.
Posted by Grieve at 12:00 PM

Email ThisBlogThis!Share to TwitterShare to FacebookShare to Pinterest
Labels: Boukiés, Community Board 3, lawsuits

Good! Shut them down, we don't need more people having liquor at a restaurant in the neighborhood, this is how we stop gentrification, the community wins again, etc.

(I don't know if this gambit on behalf of Valtzglou will work, but if it does, it makes the community boards' tactics a little less effective. I think he was stupid to accept the agreement in the first place, but Heartbreak would have never opened without it... it's strange that the CB sees the location to be fit for a responsible operator for beer/wine but not for hard liquor, in perpetuity, so a bit of common sense is on Valtzglou's side)

alright just quickly looking over this situation here I think I see what the problem is...there is no way he can get a full liquor license when there is a church across the street (the church of the Nativity), you have to be a certain distance from them, I think 500 feet...so I dont know where he is going with this...but on saying that, a liqour license is vital for a nyc restaurant, you're pretty much dead without it.

Anyway Cafe across the street (and probably 2 or 3 ft closer to the church, has liquor, so don't think that's the issue. I'd give them the license simply to thank them for having such a f'n delicious grilled octopus.

No liquor licenses within 200ft of a church (defined as a church by the liquor authority) measured door to door. 2nd Ave is wide.

The 500ft rule just requires that if there are more than three licenses within that radius of the applicant's site, the application must be heard at the community board and again at the State Authority.

Heartbreak was a terrific restaurant, probably the only one (outside of the too small Roettele AG)serving that kind of cuisine in the city. It's very unfortunate they couldn't make a go of it. Here's the NY Times review, with which I wholeheartedly agreed. http://www.nytimes.com/2011/02/02/dining/reviews/02dinbriefs-2.html

??? Not sure. You left a comment on this post? Had a spam attack yesterday... I was getting about 10 comments a minute. Perhaps I accidentally deleted. Sorry if that was the case.

that is f*cking bullsh*t and that i don't hear the "community" clammoring for expensive greek food, that i would love to see the zipcodes of their last 100 patrons, that this is to serve not OUR interests but the intersts of Valtzglou alone, and that the cb3 is the last shred of power we residents have

Boukies is great. Not sure why anyone would have a problem with it.

I want to add this:

1. If Heartbreak was so good, why did it close? With 2 Michelin stars? That makes no sense. If you need whiskey and vodka to survive, your dinner can't be that great. Foodies want wine with dinner anyway.

2. 11B, a pizza joint, survived without a liquor (not even wine or beer I don't think!) license from the time it opened to just last year when it finally got one. 11B a huge space, too. It can be done!

2. Valtzoglou made an agreement with a city agency. Going back on your agreement, then saying that city agency has no authority anyway, is really strange behavior.

To clarify, Shawn, CB3 is not a "city agency," but an advisory board. It seems this lawsuit is for the very reason that CB3 sees themselves as having more power than they do.

Shawn & Glamma — Same the venom for the frat bars and douchy places, OK? Do you even know Christos? He has certainly been around here longer than you have.

Your cluelessness knows no boundaries. Do some homework. This is from Grub Street: "It was a heartbreak indeed when Christos Valtzoglou had to close his restaurant, Heartbreak, just two days before Michelin awarded it a star."