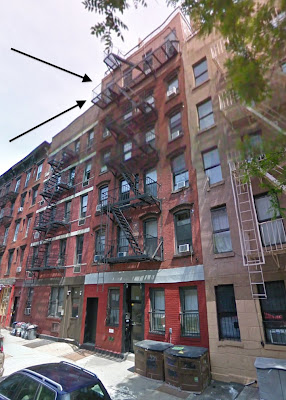 The Board of Standards and Appeals (BSA) has finally ordered the removal of the long-contested penthouse at 515 E. Fifth Street.

A quickie recap: The BSA had previously ruled in 2008 that landlord Ben Shaoul needed to remove the 6th and 7th floors. However, his attorneys had requested that the city grant a zoning variance to "permit the constructed enlargement, minus the penthouse, to remain" here between Avenue A and Avenue B.

According to the Tenants Association of 515 East Fifth Street, the BSA gave Shaoul 60 days to complete demolition. Upon documentation of the removal, the BSA will consider granting the various zoning variances to keep the 6th floor.

As we understand it, there are four units in total on these two floors.

Meanwhile, will Shaoul actually comply within the 60-day timeframe? (No snickering!) It only took Shaoul about three years to start the demolition process on the illegal penthouse at 514-516 E. Sixth St. The scaffolding and sidewalk shed have been at the site for 15 months. And part of the penthouse remains, according to neighbors.

Another BSA hearing on Ben Shaoul's illegal rooftop addition; plus, rent 1 of the contested units!
Posted by Grieve at 5:20 AM

Q: What did the barber say to make Ben Shaoul mad?

A: Take a little off the top?

Since they are already built albeit illegal it seems senseless to destroy housing in a age of needing more housing why not simply force them to be offered as affordable low income thus denying him his economic gain and providing some affordable housing. This approach will disincentive any landlord from building violating code as taking it down in a city so in need of housing does destruction make sense?

I'm sorry but we really did this to ourselves. Apathy concerning these transplant real estate pigs and lack of attention ten perhaps twenty years ago is the answer.
A monster such as Shoul and Croman is created by allowing them to prey.

I said it last time and I will say it again - Ben Shaoul needs to go to jail until the law is obeyed.
Fuck these wealthy real estate guys just laughing in the face of the City and the legal process. I'm sure he's continuing to collect rent on those units as the process drags out.

Put his ass in Rykers and the "illegal addition" will be gone in ten days.

Not much happening with the illegal addition on E 6th St, as you point out... I live next door and really feel for the people whose windows have been obstructed for over a year now by the scaffolding.

I live on the block with the illegal addition on 6th street and there have been workers there this summer--I thought they were dismantling the top story or stories but have been told that he was given permission to keep them if he added an elevator to the building. So apparently this is what he is doing. Anyone know if this is true?

I think, as good neighbors, we should pitch in and help Comrade Shaoul in his time of need. Our community shows concern with action. I'd be delighted to help remove Mr. Shaoul's illegal prenthouse and I feel sure many other people feel the same way. Working together to remove the penthouse will make us all feel happier. No?

No offense to those that live on the sixth floor of a walkup but besides a possible good view who is renting an apartment like this?