Please do not cut down bendy tree just yet 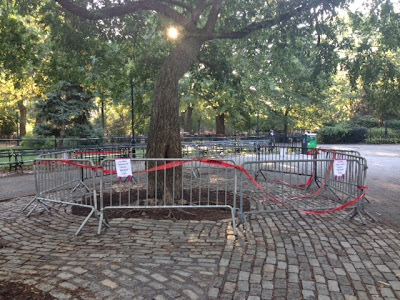 That's the message on signs that appeared this morning around the doomed leaning elm (aka bendy tree) in Tompkins Square Park... 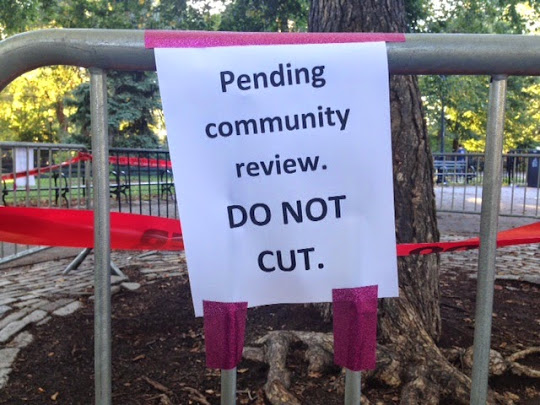 As previously reported, an arborist hired by the Parks Department found the favorite tree structurally unsound and recommended that it be cut down. However, there is a movement afoot to, at the very least, get a second opinion on the tree's health and involve the Community Board in the decision before the Park loses another tree.

Photos via Church of Stop Shopping

Bendy-lujah
Posted by Grieve at 8:19 AM

Yay, second opinion! I have little faith in an arborist hired by our parks dept. As much as I love Geoffrey , they are incredibly understaffed and fairly reactionary at this point.

This could be a decision more about preventing the city getting sued if this tree falls on someone than the actual well being of this tree. I love this tree but can see both sides of this.

I find it really hard to believe that there is no way to more comprehensively brace these poor ancient elm. We can send men to the moon but we can't rig a system to save Old Bendy?

To save "Bendy Tree," send an e-mail now to Community Board 3: Susan Stetzer, sstetzer@cb3manhattan.org and Derdra Stokes-Starkes, dstarkes@cb3manhattan.org.
Tell them the reasons we need this tree.
NYC & Parks Dept. have cut down many healthy trees over the last year for no reason at all.
Tree Hugger

So people tape up signs, take pictures of them, and claim there's a movement afoot? I would be surprised if the Community Board positioned itself with people whose argument is that they don't understand how a tree's health is determined.

The tree can be supported by a brace.

Source: I am a branch manager.

folks, this tree is toast. the roots are coming up on the side opposite the leaning side, in other words it is coming out of the ground - how this was allowed to grow here under the big tree above it is a story in itself. Although it is sad, its not worth hysteria.

I do not speak for this tree.

Heaven help us from another "unbiased" Community Board decision. When the tree cracks and falls in another major storm will there be an outcry that the city should have known about this danger to the community and done something? It appears that on some issues no one can ever do anything right.

Having read through the comments, I don't see any opinions verging on hysteria,and whether it is worth it is really rather a subjective evaluation.
Perhaps in your opinion, it is not, but it might well be plenty worth it to others.