The last gas station in the East Village has closed 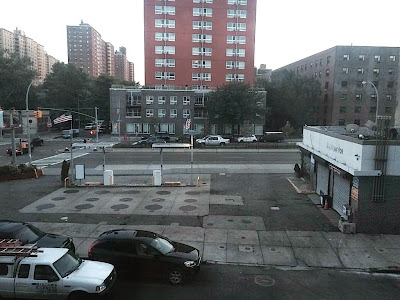 The Mobil station on Avenue C and East Houston disappeared yesterday. This is a bit of a surprise because it had been previously reported that the station had a lease until some time next year ... when the property would yield to a new building.

Back in March, Hakimian Property filed plans (still waiting for approval) to erect a 9-story mixed-use building on the site. Plans call for 45 residential units and 4,550 square feet of commercial space.

The State briefly closed the station in June for nonpayment of taxes.

State seizes Mobil station on Avenue C and Houston for nonpayment of taxes
Posted by Grieve at 5:08 AM

Sheeet! I just had my umpteenth inspection there. Mr Darryl Terryl, the manager, was always so great to deal with. I and my Subaru, will really miss them.

It's time for everyone to start brushing up on their siphoning skills again.

They also didn't have any gas stations in Mad Max, and somehow they all got along just fine.

My plans for self immolation are now thwarted. Now I have to move to Queens.

Just had my brake line replaced there on Saturday. Ben told me their days were numbered, but who knew it would be literally a few DAYS later????

Darryl was the best. Been there for years and always a gent. Will miss him.

One more reason I'm glad I don't have a car, although I like riding in them sometimes.

They don't sell gas but as far as inspections repairs etc. the fellas on attorney street have always been straight up with me.

Should probably do a community-sourced "Where to get gas around the East Village" post, for reference.

Did it vanish under cover of darkness? I go by there in the M9 bus almost every weekday, and I could have sworn I saw it Tuesday.

"Don't it always seem to go, you don't know what you got till it's gone…" I'm not sure how that song applies to a gas station disappearing, though.

Good riddance. They had the most expensive gas prices in the United States.

Noooo! I'm not ready, it's too soon. Does anyone know where Darryl is going?

Noooooo, where will I get almost run over by cabs now?

I followed these folks from the Pike Street location to this location because they were the nicest people. Darryl is GREAT. The guy who owned the place was so friendly and the mechanics were really down to earth, good people.
Does anyone know where they are going? This is horrible. I mean there seems to be no respect for the needs of the current residents of the Lower. Beware new residents--you too should be prepared for constant change once you become settled.

It will be interesting to see what kind of soil remediation, if any, will be carried out to deal with the earth beneath this former gas station. There is no doubt that the soil will be heavily contaminated underground gas tanks which are likely to have leaked slowly over decades. Such soil is extremely dangerous and can ignite in the face of any kind of friction, for example a backhoe or pile driver.