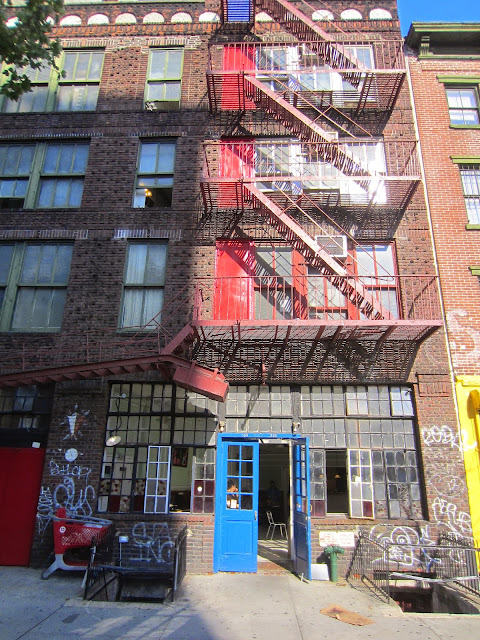 It looks like the end might finally be here for The Whitehouse Hotel, the hostel/flophouse combo on the Bowery, which has been on Deathwatch for years now.

A sign on the front door at 338-340 Bowery between Great Jones and Bond points out that the hotel is no longer accepting reservations after tomorrow... and that they are "'temporarily closing down" … 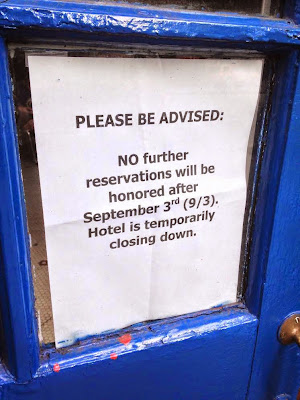 There's nothing on the hotel website indicating a closure (other than that when you go to book a room, there aren't any availabilities through next September).

A little recent history. The Commercial Observer reported in early May that hotelier Sam Chang had the property (officially called Bowery's Whitehouse Hotel and Hostel of New York) in contract to an unknown buyer for $12 million. (The owner's name hasn't hit public documents just yet.)

At that time, we noted that DOB records indicate new plans for a 9-floor hotel with a proposed 68 rooms. (Total cost of the project is listed at $5 million.) Michael Lisowski of Otte Architecture is the architect of record.

It's not clear if the Whitehouse would be demolished for the new hotel, or if new floors would be dropped on top of the existing structure.

According to the DOB, the city disapproved the hotel plans on June 10.

In 2011, the hostel spruced itself up to appeal to the backpacking set. (For $45, guests can stay in a tiny room where the walls don't go up to the ceiling.)

The days of the SRO on the Bowery are winding down, of course. The owner of the Sunshine Hotel recently announced plans to downsize and convert the second and third floors of the SRO at 241 Bowery into commercial lofts. Meanwhile, the Ace Hotel is taking over the former Salvation Army-owned building at 225 Bowery.

Another round of plans to convert the Whitehouse Hostel on the Bowery into a 9-floor hotel
Posted by Grieve at 5:00 AM

Good riddance! Get outta here. I don't like luxury hotels either but I'll take them over two places which set up random violence. Obviously I'd take affordable housing over both but that isn't in this city's vocabulary.

i have always liked the multi-pane glass front of this place.

I was walking around mid and up town (museum stuff) and realize how few backpack tourists can be spotted in town, I am not counting crusties in this group. AirBnB seems to be taking up the void in affordable hotel rooms these days but landlords will sooner or later crack down on tenants and get some city ordinance to back them up. As with so many changes these days you can only wonder when this house of cards will collapse.

This sucks. I stayed there in 2007. It was all I could afford. These places provide needed housing. I guess now the non tourists can join those who sleep on the train or go into the shelters. This sucks.

There's still Hotel 31 and the Chelsea International Hostel not tooo far away for cheap night's stay.....and MUCH nicer accommodations.

Still and all, another one bites the dust. I wonder how many of these projects are just money-shills.....more about laundering money than setting up a long-term, neighborhood business.

DrBop These now shuttered hotels provided housing for those who can't afford the places you mentioned. People lived at the sunshine/white house etc. This was super low income housing. These places weren't the nicest but they met a need that is now unfilled. They were home and community to many. There is no replacement on the horizon. They would take you in with cash and an ID. Closing these spots makes more homeless and makes the housing situation worse. There used to be lots.of flophouses that kept people off the street. I guess they go.ronthe shelters now. A setup that has the city pay 3000 a month to politically connected landlords for horrendous housing. That's 3000 a month per apt. Why doesn't DiBlasio change this? Too many real estate donors to his campaign?

Hotel 31 is like $115/ night, and Hotel 17 my old standby when the ex absolutely would throw me out is about the same these days. When I had to stay there I think it was $32. Point being these hotels at over $100/night are in no way alternatives for these displaced tenants.

As a former Bowery resident (1967-1971) the end of the Whitehouse is no surprise. Back in the day the city had contracts with most of the flophouses on the Bowery to provide housing for the bums, winos and assorted derelicts who made up much of the population of the skid-row. The "White House" had no official name back then but it opted out of the city's program to house the homeless because it would not consent to house black people, the hotel got it's name by default. I enjoyed a two week drunk at the White House flush with money earned in the Catskills; I think the weekly rate was less than $20 then.

Check out Leo House on W. 23rd St. in Chelsea, a well-kept secret. Or used to be before the tourists found out about it. Cheap,very clean and run by some Catholic organization, I believe. Nuns work the check-in counter. Used to stay there before the tourists found out about it when it was under $100 per night. Don't know what it is now, but they have a website.

I think some of you are missing the point. This isn't about finding a room for under $100 a night. its about low income housing being removed and not replaced. This is PERMANENT housing for these guys. They LIVED there and I know one guy who was paying around $500 a month. The only place left I know of is the Vigilant is Chelsea which is $150 a WEEK. This to me is way more important and impactful than a bar or deli closing. There is no way this place is ever coming back. Where is the mayor and where are the activists? Guess spending 1 billion on homeless 'services' is what they want to promote. Hire more unionized city workers- give more money to shady landlords and pretend something positive is happening. What a joke. I guess the Bowety Mission is next. To Anon Sept 2 at 6:34 am- the 'random violence' is more likely to occur from people driving their bentleys while drunk or bros pissing and fighting and puking.