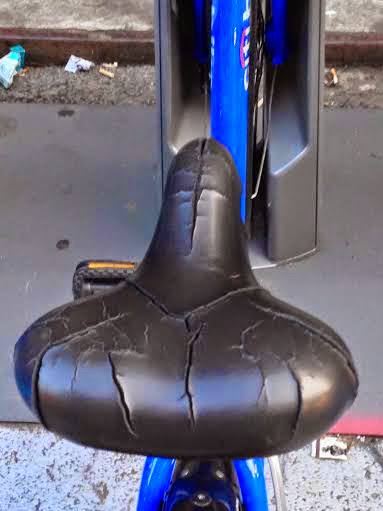 An EVG reader shared this post from the Citi Bike blog yesterday...

We’re excited to announce that over the next few months, we will be installing new seats on the entire Citi Bike fleet.

1,500 new seats have already arrived and are being installed on bikes as they come through our shop for other repairs. Soon an entire shipping container full of seats will arrive with an additional 6,000 seats. This means we’ll have plenty of seats to cover all of our bikes plus extras to spare.

So where do all the old seats go? We’ve partnered with Bikes for the World, a nonprofit dedicated to providing affordable bikes in developing countries. Rather than let used bike parts sit in a landfill, Bikes for the World rescues and recycles them to help individuals travel to work, school, and health services.

Wow, I wrote about this before Citiblog? They should hire me!

Only Citibike could replace their old cracked but comfortable seats with new seats are thinner and less comfortable, and claim this is an improvement. All they need to do now is remove the front wheel and start calling them unicycles.

Now if they could just fix the cracks in the rest of the program, but even that is being delayed now that Alta is dragging out the negotiations with Related/Equinox, who just want to take over the program and fix it. That much-needed program expansion to uptown and the boroughs which was promised for this year/next year/2 years/3 years from now will just have to wait, but I'm sure they will try to spin that as an improvement too. Don't worry Queens, we'll probably get to you in the next decade or so. As for the Bronx, you better stick to jumping the turnstiles and taking gypsy cabs.

Hey Giovanni - As someone who rides a Citibike and my own bike at least a couple of times a day I prefer a thinner, harder seat. I don't like mushy seats, and most people who regularly ride a bike don't either.

Nothing says it better than 1,000's of NYers butt crack sweat

So the seats are cracked - big fat hairy deal. Ok, so they don't look great, but does it make one bit of difference?

@12:20 am well since a citibike is replacing all of the seats apparently yes it does matter. The old seats got soaked every time it rained you had your adult diaper on it matters.

As predicted, the deal to buy out CitiBike is on hold, the two sides cannot agree on the terms, and Alta is being very difficult to negotiate with according to most news reports.

Also the NYDN reports that city Comptroller Scott Stringer is auding the finances and management of the CitiBike program, which will take several more months. Seems like they may be losing more money than was reported.

This means any deal probably won't happen until after the audit is done. But at least you'll have these nice new and much harder seats to ride on now, and the saddle sores are free.

Giovanni, that's quite a call.

I recently predicted that a coin I tossed would land heads, and it did!

There are more that two sides to a coin, last anon. But the way millenials think nowadays are just in either or, black and whiate, us vs, them, and especially the tech bros, 1's and 0's.