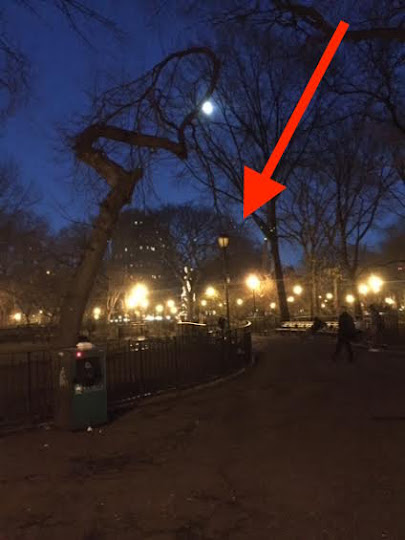 Several readers have now noted that the light in this lamp post in the southwest corner of the Park ... near the Avenue A and East Seventh Street entrance ... has been out for months... One reader said that she finds this particular troublesome given the groups that often congregate in the evenings at the nearby chess tables.

Meanwhile, over in the playground along Avenue A at St. Mark's Place, there are reports of a man who lets his dog use the children's sandbox as a toilet on a regular basis early in the morning.
Posted by Grieve at 4:15 AM

The children's playground is locked so he/she must bring the dog in soon after they open it up and before any kids/parents get there. That takes extreme planning.

Here's the plan: to own a dog in NYC you need a license. To get a license you need to have a DNA sample of your dog on record. If your dog poops and you don't clean it up, that poop gets tested and the DNA links it back to you. Your filthy self gets a punitive fine for making the neighborhood dirty and diseased. Poop problem solved.

As for peeing... I still don't get why dogs are allowed to do it, but I take one leak on the sidewalk and all of a sudden people start running away from me.

The reports of a man using the children's playground and its sandbox is no surprise to me. I live across from Sauer Park on 12th Street which is a children's playground exclusinvely yet I am constantly asking people to leave when I see them using it as a private dog run. There is a big sign on the gate "No Dogs Allowed" yet they always have a lame excuse to justify their actions.

Maybe the should start asking all the homeless and the crusties for these licences. If you cant house yourself you shouldnt have dogs to use as panhandling props. Where are the animal contol people and ASPCA on this?

Anonymous March 1, 2016 at 8:08 AM
in the beginning there was "curb your dog"
you got ticketed for pee/poop on the sidewalk.
sanitation sort of washed down the street (trucks with big brushes and water) on a rather regular basis.
in their great wisdom the city bureaucrats changed the law to pick up after your dog but did not retain the curb your dog part so that now a dog can pee/poop anywhere and lazy owners don't give a shit.
even picking up the poop leaves an invitation for the next dog.
it is possible to train a dog to use the curb if you're not an inconsiderate lazy asshole. people are not so easy to train.

What do you expect, this neighborhood is all about how much shit you can dump on your neighbor and get away with it. Just ask the fuckers downstairs right no at Izakaya with their illegal construction - the entire building is shaking and vibrating so bad I actually have to leave the building.

Can EV Grieve host a page where we can post pictures/videos of the inconsiderate jerks that don't clean up after their dogs? These people deserve public shaming.

Not stepping off the sidewalk to poop until NYC brings traffic back under control ... said...

@blue glass : "In the beginning" as you put it the folks driving their cars would look to see what's in the road before driving over it.

Today (well, yesterday), we see that if you fall down in the street you are fair game for being run over and killed by a driver of an SUV that's hurrying past a couple of double parked cars to make a right turn before the light changes:

I say shit all over the place. Id take dog shit to the natural scent of crusties in the summer. Plus perhaps it will eliminate the yup.